Now might be a good time to turn William C. Rhoden’s ‘Forty Million Dollar Slaves: The Rise, Fall & Redemption of the Black Athlete’ into a film or TV series 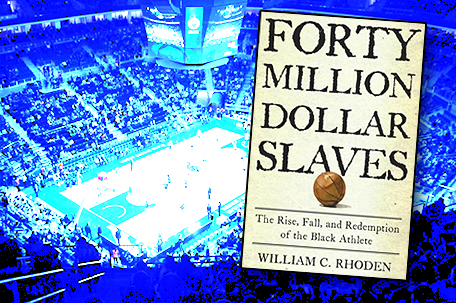 In light of the hoopla around LA Clippers owner Donald Sterling (the NBA came down on the billionaire with a verdict last week), there couldn’t be a better time for a Hollywood studio executive, or intrepid indie film producer, to option the rights (if it hasn’t happened already) to William C. Rhoden’s 2007 best-seller, “Forty Million Dollar Slaves: The Rise, Fall, and Redemption of the Black Athlete.”

It’s not a work of fiction, so, assuming a fictional scripted account based on the book is the goal, it would require some imagination.

It’s a book I read years ago, and will likely revisit. But I recall considering it a satisfying read.

In short, New York Times sports columnist Rhoden offers a provocative, loaded assessment of the state of black athletes in America, using the cutting metaphor of the plantation to describe a present-day sports industry that’s essentially defined by white ownership and black labor.

From Jackie Robinson to Muhammad Ali and Arthur Ashe, African American athletes have been at the center of modern culture, their on-the-field heroics admired and stratospheric earnings envied. But for all their money, fame, and achievement, says New York Times columnist William C. Rhoden, black athletes still find themselves on the periphery of true power in the multibillion-dollar industry their talent built. Provocative and controversial, Rhoden’s “$40 Million Slaves” weaves a compelling narrative of black athletes in the United States, from the plantation to their beginnings in nineteenth-century boxing rings to the history-making accomplishments of notable figures such as Jesse Owens, Althea Gibson, and Willie Mays. Rhoden reveals that black athletes’ “evolution” has merely been a journey from literal plantations—where sports were introduced as diversions to quell revolutionary stirrings—to today’s figurative ones, in the form of collegiate and professional sports programs. He details the “conveyor belt” that brings kids from inner cities and small towns to big-time programs, where they’re cut off from their roots and exploited by team owners, sports agents, and the media. He also sets his sights on athletes like Michael Jordan, who he says have abdicated their responsibility to the community with an apathy that borders on treason. The power black athletes have today is as limited as when masters forced their slaves to race and fight. The primary difference is, today’s shackles are often the athletes’ own making.

The title and the notion behind it are certainly attention-getters, and I’m sure Rhoden was fully aware of that when he came up with the idea. In fact, he even admitted that his original title – the symbolic Lost Tribe Wandering – lacked punch. And Rhoden certainly doesn’t pull any punches here. Rather than relating the all-too-familiar rags-to-riches stories in which underprivileged black athletes reach the so-called “Promised Land” by way of their athletic ability, he paints the system as one in which those athletes are isolated from their backgrounds, used to maximize profit and instilled with a mindset “whereby money does not necessarily alter one’s status as ‘slave,’ as long as the ‘owner’ is the one who controls the rules that allow that money to be made.”

The content isn’t anywhere near as inflammatory as the book’s title, and, whether or not you fully agree with his thesis, Rhoden does make very compelling and supported, if controversial arguments, providing an insightful, not often considered look at the role blacks play in sports that they dominate, but really have no control within.

I could nitpick, but I think it’s, at least, worth a read, and don’t want to discourage, so I won’t. Pick up a copy for and read it for yourself.

It’s part memoir, part history, part journalism as Rhoden builds a historical framework that accounts for the varieties of the black athletic experience in the past, and applies them through today, giving a nod to the intrinsic racism within our society, and the allocation of power between races in this country.

I’m not aware of any film or TV series based on the novel being in the works, but, as I said earlier, given the international stir caused by Donald Sterling’s racist outburst, all caught on tape, this would be a perfect opportunity for an enterprising studio exec or indie producer. And I won’t be surprised if an announcement comes soon, announcing an option – if it hasn’t already happened.