Not exactly gloating, stockpiling ‘preppers’ have a moment 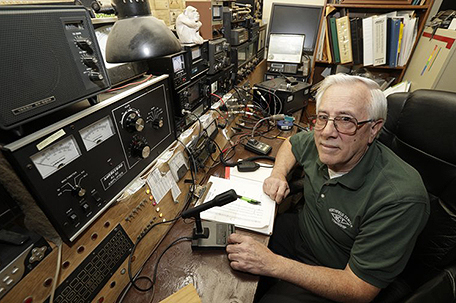 ABOVE PHOTO: In this Friday, March 13, 2020 photo, Paul Buescher poses by his ham radio, in Northfield Center Township, Ohio. Buescher is one of 32 members of a group in northeastern Ohio that shares a farm packed with enough canned and dehydrated food and water to last for years. For those in the often-mocked “prepper” community, this is quickly becoming their “I told you so” moment, as panic buying has cleared store shelves across the U.S. amid growing fears that the new coronavirus will force many Americans to self-quarantine for weeks in their homes. (AP Photo/Tony Dejak)

TOLEDO, Ohio  — Curt La Haise has put up with plenty of razzing from friends over the years who have called him paranoid for stockpiling an eight-month supply of food in his basement and having enough fuel to power his generator for almost an entire winter.

They’re not laughing anymore amid panic buying that has cleared store shelves across the U.S. and growing fears that the new coronavirus will force many Americans to self-quarantine for weeks in their homes.

“Now my friends are like, ‘What should I do, what should I get?’” said La Haise, who operates a firearms and safety training business near Sun Prairie, Wisconsin. “Prepping doesn’t look so bad now.”

For those in the often-mocked “prepper” community, this is quickly becoming their “I told you so” moment. But many are resisting saying that, even if it’s in the back of their minds. What they hope is that they’ll finally be taken seriously and that more people will follow their lead.

“We’re not laughing. We’re not saying, ‘I told you so,’ when people are out there fighting over toilet paper and hand sanitizers,” said Paul Buescher, of Northfield Center Township, Ohio.

Buescher is one of 32 members of a group in northeastern Ohio that shares a farm packed with enough canned and dehydrated food and water to last for years. He said he is now getting calls all day long asking for advice.

Survival supply stores can’t keep up with the demand for food kits and medical supplies.

“Every single business that has to do with emergency preparedness is overloaded,” said John Ramey, founder of a Colorado-based prepper website called The Prepared.

Most preppers say they are about self-reliance and common sense and are quick to distance themselves from the “doomsday preppers” who are depicted on television shows awaiting the day most of the world’s population is wiped off the map.

“The vast majority of this is ‘beans and Band-Aids,’ not ‘bullets and bunkers,’” Ramey said.

Jim Cobb, a disaster readiness consultant and editor-in-chief of Prepper Survival Guide magazine, said he has seen a few fellow preppers gloating on social media about people who are crowding stores in search of disinfectants.

“I hate the thought of alienating any of them because they think were a bunch of elitist goofballs.” he said. “We’re trying to take advantage of the opportunity that for once they’re not laughing and pointing fingers at us.”

While most people who have tested positive for the virus experience only mild or moderate symptoms, there’s a greater danger and longer recovery period for older adults and people with existing health problems.

As for the preppers, they have their own recommendations for anyone who is unsure of what to do next:

— Be ready to stay at home for at least two weeks. Have plenty of food and water. Don’t forget about your pets and medicines. That includes over-the-counter products for fevers and coughs.

— Get your finances in order. Make sure you can pay your bills and have cash on hand.

— Maybe most important, relax and don’t panic. And pay attention to the news and what’s happening around you.

Drugs… My moment of truth in rehab