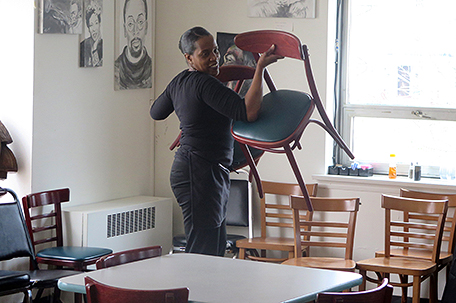 ABOVE PHOTO:  Laurie Thurman, who co-owns Coffee Makes You Black, a well-known breakfast spot on Milwaukee’s predominantly African-American north side, shown Friday, March 18, 2016 in her Milwaukee shop. Thurman hasn’t decided whether she will vote for Democratic Presidential candidates Hillary Clinton or Bernie Sanders in the upcoming Wisconsin presidential primary. She’s leaning toward Clinton, but she said she was surprised to learn her husband is voting for Sanders. (AP Photo/Greg Moore)

By Greg Moore and Emily Swanson

MILWAUKEE –This month has brought a new challenge for Hillary Clinton’s presidential campaign: Black voters in Rust Belt states aren’t as solidly behind her as they’ve been in the South.

It led to the Democratic front-runner’s surprise loss in Michigan, where about a third of black voters supported Bernie Sanders, and it nearly cost her Missouri, where African-Americans voted more like their counterparts across the Midwest than in the South. Now it could foreshadow vulnerability for Clinton in Wisconsin, the next Northern battleground primary.

What’s behind the trend? Exit polls conducted for The Associated Press and television networks by Edison Research reveal a possible answer.

Black voters up North have appeared more likely than black voters down South to say race relations in the U.S. have recently gotten worse. And while large majorities of African-Americans in both regions trust Clinton to handle the issue, those in the Midwest have been much more likely to say they trust Sanders.

Rust Belt blacks live closer to some of the major racial conflicts of recent years _ the police killing of Michael Brown in Ferguson, Missouri; the police shooting death of 12-year-old Tamir Rice in Cleveland, Ohio; and the tainted water crisis in heavily black Flint, Michigan. And they are well positioned to turn out and express their dismay at the polls.

“Absolutely, there are enough to make a difference,’’ said Bradley Thurman, 66, an African-American cafe owner in Milwaukee, noting that black support twice helped tip Wisconsin toward Barack Obama, even as many other races in the state have gone in favor of Republicans.

Down South, Clinton has routinely picked up support from 8 in 10 black voters or more. But in areas farther north across the Midwest where manufacturing has contracted and factories have closed, support has been as low as Missouri’s 67 percent. That primary election had been too close to call until Sanders conceded Thursday, giving Clinton a 1,531-vote win.

About 7 in 10 black voters backed Clinton in Ohio and Illinois, less than in the South but not enough of a drop to deny her those states on a day when she also picked up victories in Florida and North Carolina.

The tight vote in Missouri, a swing state where residents have long debated whether they’re Midwestern or Southern _ underscored feelings that could help keep Sanders afloat.

“I didn’t like the statement Clinton made calling our kids `super predators,’’’ said Syreeta Myers, 42, who is black.

Myers’ only child, VonDerrit Myers, was killed in St. Louis in 2014 by a white police officer, two months after Brown was fatally shot in nearby Ferguson. She’s been politically active ever since, attending rallies and marches. Myers said most of the people she knows are behind Sanders because of “what he said about stopping police from killing our children.’’

“I saw online where someone said, `I can’t vote for Dr. King, so I’m going to vote for the guy who marched with him,’’’ said Truog, whose father is black and mother is white.

Truog studies international affairs and political science in Milwaukee, a city that saw months of protests over the death of Dontre Hamilton, a black man killed by a white police officer in 2014. He said he backs Sanders, citing the candidate’s positions on income inequality and student debt as factors.

Sanford, who is a black independent, remains undecided. “Honestly, I just don’t like Clinton,’’ he said. He said he’s a fan of Republican front-runner Donald Trump’s outspoken style but doesn’t admire Trump enough to vote for him.

Similar dissatisfaction with the government comes up in Michigan. Exit poll figures show black voters there were somewhat less likely than those in Southern states where the question was posed to have positive feelings about the way the government is working.

This also could hurt Clinton, who’s seen as the establishment candidate. The data show that black support at the high levels Clinton has seen in the South probably would have flipped Michigan into the win column and added breathing room for her in Missouri.

He supports Sanders because of the Vermont independent’s bold proposals. “It’s a lot of pie in the sky, but at least he’s throwing it out there,’’ Thurman said.

His wife looked surprised when she heard his position.

She’s leaning toward Clinton because “she’s been around.’’ But the matter isn’t decided, she said, and “maybe my husband can convince me.’’

In a change from 2008, Clinton talking often about race