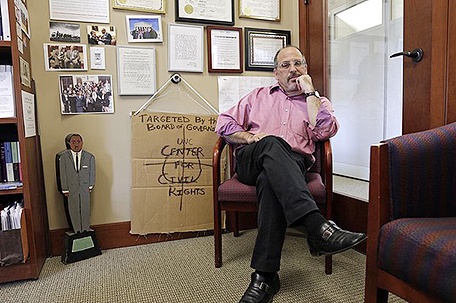 ABOVE PHOTO:  Mark Dorosin, managing attorney at the UNC Center For Civil Rights poses for a photo in his office in Chapel Hill, N.C. The center founded at the University of North Carolina by a fearless civil rights attorney to help the poor and disenfranchised is the latest target of the conservatives who are remaking higher education in their image as part of their management of the state this decade. (AP Photo/Gerry Broome)

RALEIGH, N.C. — A center founded at the University of North Carolina by a civil rights attorney to help the poor and disenfranchised is the latest institution to come under fire from conservatives as they work to leave their mark on the state’s higher education system.

African-American attorney Julius Chambers, who endured firebomb attacks in the 1960s and 1970s as he fought segregation, founded the UNC Center for Civil Rights in 2001, serving as its first director. Now conservatives on the state Board of Governors, which sets policy for the 16-campus system, want to strip the center of its ability to file lawsuits, removing its biggest weapon.

Proponents say the move isn’t ideological, but that the center’s courtroom work strays from the education mission of the country’s oldest public university. Critics say one of the South’s leading civil rights institutions would be defanged.

Nichol was dean of the law school, where the center is housed, when it was founded. He said in the email that he encouraged Chambers to found it at UNC.

Nichol also headed UNC’s Center on Poverty, Work and Opportunity, which the board closed two years ago by saying it didn’t serve its academic mission. It was one of about 25 UNC-affiliated centers shuttered after a review of the 240 centers in the campus system.

Those developments followed a conservative political takeover of North Carolina, launched in 2010 when Republicans took their first state House and Senate majorities since the late 1800s.

Board member Steve Long said the center must refocus on its education mission, and “one of the things you say no to is public interest law firms.” He added, “free enterprise, civil rights, protection of children’s rights – whatever the cause it doesn’t matter. Are you going to stay on mission as an educational institution or not?”

One lawsuit by the center alleging segregation in Pitt County schools in eastern North Carolina especially rankled Long. County officials told Long they successfully fought it with $500,000 from a textbook fund. “This is outrageous,” he said. “We cannot allow academic centers to hire full-time lawyers to sue cities and counties.”

The center has represented dozens of North Carolina individuals and groups over the years, often successfully, in fighting social, economic and racial discrimination. Its clients are too poor to afford representation – their targets are often school districts, cities, counties, even state government.

When Concerned Citizens for Successful Schools in Johnston County sought records proving its poor and minority students weren’t getting equal education opportunities, the local school board balked. Last year the center sued and, within months, the records were delivered.

“The center gave our group credibility because we were just a group of concerned citizens,” said member Susan Lassiter. “We are not the ACLU. We are not the NAACP. We are just citizens wanting to improve our schools.”

Her group doesn’t have deep pockets and she now worries about finding a civil rights attorney who is experienced in public education law and will work for free.

Concerned Citizens of Duplin County, which claimed segregation in a local schools facility proposal, is also bothered by the proposal. Member Johnny Hollingsworth said the center was serving its education mission: “I can’t think of a better way to train new lawyers than through practical, hands-on experience.”

The dean of the UNC law school said the center will work only on current cases and not join any new lawsuits for now. All acknowledge the fight’s not about money: The center isn’t state-funded but runs on grants, foundation money and donations.

“The folks pushing this are opposed to the nature of the advocacy that the center does and the issues that people we represent are fighting for,” said center managing attorney Mark Dorosin.

Chambers was one of the first blacks attending UNC’s law school, becoming editor of its Law Review and graduating first in his class. He went on to a distinguished career litigating civil rights cases, rising to head the NAACP Legal Defense and Educational Fund for a time. He died in 2013.

John Gresham, longtime friend and law partner, said Chambers envisioned a strong advocacy arm in the center because he knew the civil rights struggle wouldn’t end soon, if ever.

“He never thought the struggle was over,” Gresham said. “In fact, he worried that a number of things were going backward instead of forward, so Chambers was under no illusion that this was something that was going to be accomplished in his lifetime.”