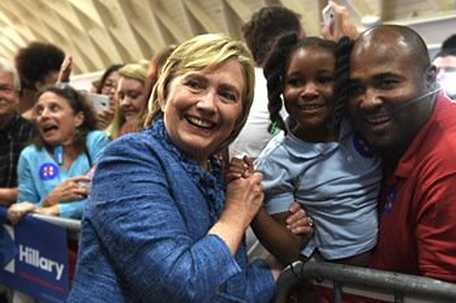 ABOVE PHOTO:  Hillary Clinton on the campaign trail. (Courtesy of hillaryclinton.com)

Michelle Alexander, the brilliant author of the book “The New Jim Crow,” writes in “The Nation” that Hillary Clinton does not “deserve” the Black vote. She makes a strong case. She reminds us that the Bill Clinton administration yielded a draconian crime bill and welfare “deform” (I call it “deform” instead of reform because the Clinton changes made a bad system worse) that demonized poor women. While Bill and Hillary Clinton are two different people, Alexander uses Hillary quotes to illustrate the ways she supported her husband’s policies.

Michelle Alexander is right to say that Hillary does not deserve the Black vote. She declines to endorse Bernie Sanders, though, describing him as “the lesser of two evils.” To his credit, says Alexander, Sanders opposed welfare deform and has been a far more vocal and aggressive critic of banks than Hillary. But Alexander says he still doesn’t get “it” around issues of racial justice and notes that both he and Hillary supported the Iraq war.

I’m intrigued by the concept of “deserving” a vote. From my perspective Bernie doesn’t deserve it, Hillary doesn’t deserve it, and none of the motley crew of Republican candidates deserve it. No Democrat or Republican has ever deserved the Black vote. The dictionary defines deserve as, “to do something or have or show qualities worthy of (reward or punishment).” To say someone “deserves” the Black vote, suggests that someone is entitled to it or has a right to it. I don’t think any candidate has a right to the Black vote. Frankly, with the possible exception of Lyndon Johnson in 1964 (after the passage of the Civil Rights Act) and the Rev. Jesse Jackson (after his history of activism), I don’t think any Democrat (or Republican) for that matter. What has either Hillary or Bernie done to “deserve” the Black vote?

No candidate should claim the sentimental right to the Black vote either, and I think in some ways that is what Hillary Clinton is attempting. As Alexander correctly points out in her article, some African-Americans are almost irrationally loyal to the Clintons. Many other African-Americans, though, have a measured view of the Clinton years, celebrating historic appointments, like that of Alexis Herman as Secretary of Labor, condemning the ways that Lani Guinier and Jocelyn Elders were abandoned by the Clintons, and balancing policy failures like welfare deform with some policy successes. Clinton’s stand-alone record includes a sensitivity to diversity that Sanders lacks. As a senator and as secretary of state, she had staffs that were very inclusive, with several African-American women, in particular, serving in leadership roles in the State Department. Her record shows that, as president, she would continue her commitment to diversity and that we might finally have a cabinet that “looks like America”. Does her commitment to diversity alone make her entitled to the Black vote?

The Black vote should be earned, not bequeathed. But too many African-Americans seem to think that voting is the most, not the least, they can do. We must vote for politicians based on their track record and also on their promises. But then we must hold them accountable so that they keep their promises. We didn’t do it with Clinton in 1996 when we voted for him even after welfare deform. We didn’t do it with Obama in 2012, when we voted for him after a disappointing first term. African-Americans, like others, must make demands of those who hold public office, or they are free to ignore us.

The challenge is that our two-party system too often fails to provide us with a satisfactory set of alternatives to the status quo. While I was disappointed with President Barack Obama’s first term, I probably would have cut my hand off before voting for Mitt Romney. Similarly, as disappointing as Clinton’s welfare deform was, another Clinton term was far preferable to a Bob Dole presidency. We too often are faced with imperfect options, and in choosing the lesser of two evils.

Alexander addresses the flaws of the two-party system in her article, and talks about a “revolutionary movement” of people who believe that human rights and economic justice are attainable goals. There won’t be a revolutionary movement before Nov. 7. So who deserves the Black vote? The candidate who works hardest for it. The candidate who addresses the Black community most directly and with the most relevance. The candidate who not only schedules very public meetings with the Rev. Al Sharpton, but less-well-covered meetings at a day care center, in a halfway house, in a hospital. The Black vote should not be something a candidate deserves. It should be something a candidate earns!

Julianne Malveaux is an author, economist and founder of Economic Education. Purchase her latest book, “Are We Better Off? Race, Obama and Public Policy,” at www.juliannemalveaux.com.

Dr. Ben Carson–Presidential candidate talks about the campaign for the Republican nomination