No Dem challenge to Abrams as field for 2022 elections set 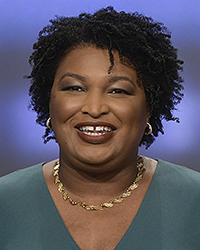 ATLANTA (AP) — Democrat Stacey Abrams showed herself to be the unchallenged leader of her party in Georgia as candidate qualifying for the 2022 elections closed Friday, drawing no primary challengers in her bid for governor.

Every other major party aspirant to statewide office in Georgia will face a party primary on May 25. Most notably, that includes Gov. Brian Kemp, who faces four other Republicans, including former U.S. Sen. David Perdue. Democratic U.S. Sen. Raphael Warnock will take on Tamara Johnson-Shealey, who has run unsuccessfully for office four times, including in the first round of the special election in 2020 that Warnock ultimately won.

Georgia Republican Attorney General Chris Carr picked up primary opposition from lawyer-businessman John Gordon. The challenger is expected to seek the backing of former President Donald Trump, part of an effort by the Trump forces to build out a ticket in the Republican primary that will include Perdue and U.S. Senate candidate Herschel Walker.

Democrat Patty Durand qualified to run against Echols for the Public Service Commission even though she said new districts would exclude her from a challenge. PSC candidates run statewide but are required to live in one of five districts.

At least one Republican and one Democrat is contesting each of the state’s 14 congressional districts, although redistricting made several districts less competitive.

“Our Republican ticket this fall will be strong, wide and deep,” Georgia Republican Party Chairman David Shafer said in a statement. He noted that 911 Republicans had qualified with the state, compared to 545 Democrats.