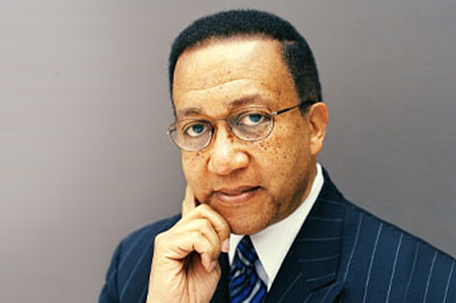 Omarosa Manigault, recently named assistant to the president and director of communications in the Office of Public Liaison for the Trump administration, has promised the first press interview with President  Donald Trump to Benjamin Chavis, president/CEO of the National Newspaper Publishers Association, according to sources who attended a private meeting with the Trump transition team last week.

Manigault’s promise of the interview was disclosed after a representative of the National Association of Black Journalists (NABJ) stressed the importance of Black reporters interfacing with the president. Both Chavis and NABJ representatives participated in the closed door meeting held Jan. 4 at the American Enterprise Institute, a conservative think tank in North West DC.

“When NABJ said we need to make sure that somebody Black interviews the President first, [Omarosa] said, ‘Oh no.  Ben Chavis and I have already spoken and he’s going to be the first interview,’” recounted veteran civil rights leader Barbara Arnwine, president/CEO of the Transformative Justice Coalition, in an interview this week. Arnwine said Chavis then “acknowledged that that was correct – that they had already been in touch with him about it.”

No working press was allowed inside the meeting, described as “off the record” for those in attendance. The meeting, billed as a “listening session” with Manigault and other senior members of the Trump transition team, drew dozens of Black leaders representing approximately 30 different mostly non-partisan and non-profit organizations.

This reporter and CNN’s Betsy Klein staked out the meeting for more than three hours standing outside the building on the sidewalk. Some organizational leaders spoke guardedly after the meeting while others declined comment.

Leaving the meeting, Chavis gave no details on what happened inside. However, reached by phone this week, he gave a general statement.

Manigault and Trump team members departed after the meeting without making any comments to the media.

If Chavis is awarded the interview, it would mark a departure from the Obama treatment of Black newspaper reporters. Despite numerous requests, no one-on-one interviews were awarded to NNPA representatives after this reporter interviewed Obama as president-elect on Jan. 19, 2009, the eve of his first inauguration. However, Obama did grant interviews to Black radio talk show hosts Al Sharpton and Joe “The Black Eagle” Madison. Journalist and communications specialist Jeff Johnson also interviewed the president on BET amidst racial unrest following police shootings of Black people two years ago.

It remains to be seen whether Chavis’ interview with Trump will reveal what sensitivities Trump may have to African-American issues. So far, the President-elect has only spoken of dealing with the high homicide rates in Black communities and building the infrastructure in “inner cities”. But he has said little or nothing in favor of civil rights agendas.

Since his election, Trump has also called for America to unite across divisive political and racial lines. Yet, he has simultaneously made nominations and appointments of people who are racial lightning rods after his campaign, which was marked by racial animous. His appointments include Steve Bannon, former head of the alt-right, White supremacist voice Breitbart News, as a chief advisor and his controversial nomination of Alabama Sen. Jeff Sessions for attorney general whose Senate confirmation hearings are underway this week.

Civil rights leaders and more than 1,000 law professors are protesting Sessions’ confirmation because of his history of racial insensitivity. This includes an expressed affinity for the Ku Klux Klan and his past prosecution of voting rights advocates. He is former attorney general of Alabama.

According to multiple sources who were inside the meeting, some civil rights representatives expressed strong opposition to the controversial nomination Sessions. However, based on interviews, the Trump team remained in “listening” mode on that topic, simply nodding without comment.

Arnwine, widely known for her passion on civil rights and social justice issues, said she told the Trump team that the President-elect needed to “withdraw the nomination of Sessions and that there would be no real rapport with the African-American community until that was done. And that no matter what they did, that would be something that they could not overcome.”

Manigault was joined by a number of transition colleagues, including Ken Blackwell, Trump’s domestic policy chair, and Katrina Pierson, a chief advisor.

The team did not respond, except Manigault who explained to her colleagues who Arnwine is, and her reputation of outspokenness in the civil rights community, Arnwine said, “There was chill in there. You could tell they were pissed off.”

Meanwhile this week, President-elect Trump himself appeared to dismiss the concerns of the civil rights leaders. On Monday, he told a CNN reporter that Sessions is a “high quality man” who would be “good” as attorney general.

Hilary Shelton, director of the Washington Bureau of the NAACP, said it was “good for them to have an opportunity like this for organizations like ours… The election is over. Now we have to talk about how we get things done that affect our communities and the people we serve. So in essence, just being able to lay the issues out on the table and address them is what’s happening here.”

Shelton said it is a “tough thing to gauge” where the relationships between the Trump Administration and Black leaders will go from here. He quoted Sessions as having described the NAACP as “‘one of the most un-American organizations in the United States of America’ because we’ve been trying to, quote, ‘shove civil rights down the throats of the American people.’”

Conservative pastor, Bishop Harry Jackson of Hope Christian Church, praised the administration for “giving significant grass roots leaders an opportunity to state what they’re about, what their agenda is, and what they’d like to see happen.” He called Manigault a “great leader.”

Most of the organizations represented in the meeting were non-partisan, with Black Republicans and Democrats participating. Among others observed by this reporter leaving the meeting were Melanie Campbell of the National Coalition on Black Civic Participation, Barbara Skinner of the Skinner Leadership Institute, Deana Bass of Bass Public Affairs, Elsie Scott of the Ron Walters Leadership and Public Policy Center at Howard University, Ron Busby of the U. S. Black Chambers Inc., Harry Alford of the National Black Chamber of Commerce,  E. Faye Williams of the National Congress of Black Women, the Rev. Charles Steele of the Southern Christian Leadership Conference; Lezli Baskerville of the National Association for Equal Opportunity in Higher Education, and Janice Mathis of the National Council of Negro Women. Journalist and communications specialist Jeff Johnson was also seen leaving the meeting.

In the emailed invitation they were told that the meeting “will allow for an opportunity to briefly share your priority issues with the official Transition Team.”

According to interviews with Arnwine and other organizational representatives, the Trump team mostly just listened, but appeared overtly interested in the organizations’ positions on school choice and vouchers. Some civil rights leaders say school vouchers siphon money away from public schools.

“They asked every single group what’s your position on vouchers,” Arnwine said, describing the Trump team as “laser focused” on that issue. “They were really trying to get the optics of how the groups would react to school choice and voucher initiatives. That was very clear.”

They also seemed overtly interested in the funding of Historically Black Colleges and Universities as well as building up the infrastructure of the nation, sources said.

Shelton, of the NAACP, praised Manigault for her handling of the meeting, saying he has known her for years.

“It will be fascinating to see how things move ahead with her. I have a lot of respect for her,” he said. “The question is how affective will Omarosa be able to be in an administration like this one.”