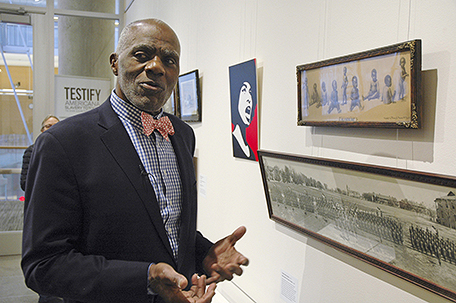 ABOVE PHOTO:  Alan Page, NFL Hall of Famer and retired Minnesota Supreme Court justice, stands in Minneapolis. by a photo of black babies labeled “Alligator Bait.” It is among the artifacts of slavery and segregation collected by Page and his wife, Diane Sims Page. They went on display at the Minneapolis Central Library this month in time for Super Bowl visitors and thousands of other people expected to flock to downtown for the festivities. (AP Photo/Steve Karnowski)

MINNEAPOLIS–An iron collar that kept slaves in bondage. A branding iron that marked human beings as someone’s property. A photograph of Black babies captioned as “alligator bait.’’ A fine china plate with gold lettering that says, “KKK ‘God Give Us Men.’’’

They’re among the artifacts of slavery and segregation collected by NFL Hall of Famer and retired Minnesota Supreme Court Justice Alan Page and his wife, Diane Sims Page. They went on display this month in time for Super Bowl visitors and the thousands of other people expected to flock to downtown Minneapolis for the festivities. The exhibit, “TESTIFY: Americana from Slavery to Today,’’ ran through Feb. 6 at the Minneapolis Central Library.

While a sign at the entrance warns that some items inside might be disturbing, there are also messages of hope and promise. There’s a banner that was held by a mourner in 1865, when a funeral train took President Abraham Lincoln’s body home to Illinois. The banner reads, “Our Country Shall Be One Country!’’ Page said it moved him to tears when he first saw it.

“For me it transports me back to that time and that place,’’ Alan Page said.

Signs that once enforced segregation in the South hang from a wall down the center of the gallery. They designated restrooms as “white’’ or “colored,’’ and marked the “colored waiting room’’ at train and bus stations. Just across from it is an assembly of vibrant pictures by Black artists, showing how African-Americans reclaimed control over their own narrative. Diane Page said the contrast between the “oppressive and expressive’’ is deliberate.

Alan Page, a feared member of the Vikings’ Purple People Eaters defensive line in the 1970s, played in all four of their Super Bowl appearances. He’s one of only two defensive players ever voted the NFL MVP. He also became the first Black justice on the Minnesota Supreme Court, serving 22 years until he hit the mandatory retirement age of 70 in 2015.

The Pages timed the exhibit to coincide with the Super Bowl on Feb. 4 in Minneapolis, but he noted that it also comes “at this time when White supremacy is raising its ugly head’’ in ways that he thought he would never see again.

“We hope the exhibit will challenge people by seeing what took place in the past, and challenge them in ways that will cause them to think about taking action, not only to prevent them from happening again, but to end the effects of that past, the effects that still linger today,’’ he said.

It’s one thing to see a picture of an artifact from that era; it’s another to actually stand in front of it, said Lois Langer Thompson, director of the Hennepin County Library system. She said the library’s location on the Nicollet Mall pedestrian zone, the site of a 10-day fan festival with free concerts and other attractions, make it convenient for visitors to stop by and see the exhibit  and warm up.

Diane Page started the collection about 30 years ago after a friend pointed out that missing amid the sleek decor and a couple of Andy Warhols on the walls of their home were any pieces of African-American art or cultural items to educate the four Page children about their heritage. Eventually, the couple would visit antique stores and work with dealers to fill their home, and his Supreme Court chambers, with artifacts from slavery and the Jim Crow era.

“These items represent facts,’’ he said. “Not somebody’s opinion about what happened. Not somebody’s view about what did or didn’t occur, but actual facts. … They help me understand where we are today. The disparities in education, our criminal justice system. For me, the message I get is that we haven’t come to grips with the discrimination that comes, that came with those facts. We haven’t addressed the present effects of that past history, the present effects of that past discrimination.’’

Daughter Georgi Page-Smith took the lead in assembling the more than 100 items on display in the exhibit, which includes a “testification station,’’ made from her father’s stand-up desk from his chambers, where visitors are invited to write their impressions in a leather-bound book.

“We knew it would be very emotional,’’ she said. “So we wanted to create an area where people could just stop for a minute, and do a little processing, and then reflect back to us.’’

As part of the exhibit, Alan Page will gave a talk last Wednesday called “TESTIFY: It’s Not About the Flag or the Anthem, It’s About Justice.’’ He said the controversy over players kneeling during the national anthem misses the point.

“That debate about the anthem and the flag is the reddest of red herrings. The point is that we have injustice. And the question is: what are we going to do about that? Protesting draws attention to that injustice, but it’s a tactic. It’s not a program to end injustice. And so one of the things I also hope to do is encourage those who would be inclined to protest to take the next step, and take some concrete actions beyond merely drawing attention to the problem, and being involved in steps to eliminate it.’’