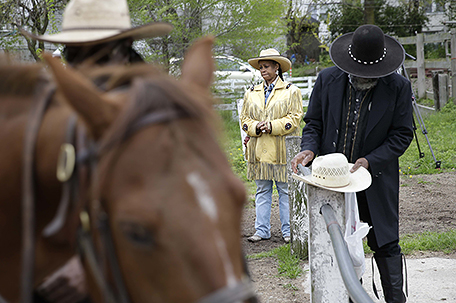 ABOVE PHOTO:  Kesha Morse, center, watches as other members of the Federation of Black Cowboys prepare a horse for riding in the Queens borough of New York, Thursday, May 5, 2016. For decades, members of the Federation of Black Cowboys have been an incongruous sight in New York City. “When children see us with the fringe jackets and the boots, that stays with them for life,” said Morse, the federation’s 67-year-old president. But now, the federation is fighting to survive.  (AP Photo/Seth Wenig)

NEW YORK — For decades, members of the Federation of Black Cowboys have been an incongruous sight in New York City.

Yes, you can sometimes find men wearing ten-gallon hats, boots and spurs in Times Square. But these horsemen were the real deal, with a stable and corral in the far reaches of Queens, and a mission to introduce city kids to the legacy of thousands of black cowboys who once rode through the Wild West.

“When children see us with the fringe jackets and the boots, that stays with them for life,” said Kesha Morse, the federation’s 67-year-old president.

But now, the federation is fighting to survive. 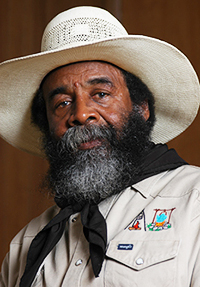 Membership has dwindled, with 18 riders remaining. And this summer, the group is losing control of the Cedar Lane Stables, which is owned by the city’s parks department.

For many years, nobody else was interested in the property, located at the edge of a busy road to Kennedy Airport. Then, last August, the city announced a competitive bidding process for a new license to run the stables. The Black Cowboys were outbid by a nonprofit group, GallopNYC, which works with children and adults with disabilities using horses therapeutically. They’ll take over in August, renaming the stables Gemini Fields.

GallopNYC will offer the remaining Cowboys continued boarding at cost, but their future remains a little hazy.

On a spring afternoon, some of the horsemen gathered by their wooden stables, with the smell of freshly cut grass and hay wafting through the air along with a whiff of manure.

“Riding makes you feel free. Just free. It’s in your heart,” says Arthur “J.R.” Fulmore, 68, a former auto mechanic and native of Lumberton, North Carolina. “Being a cowboy means being good and honest with people, and being straight up.”

Fellow cowboy Ellis “Mountain Man” Harris – bearded, blue-eyed and 78 years old – is also from the South. He grew up on a dairy farm outside Richmond, Virginia, then worked as a welder in New York and became one of the Cowboys after watching a black rodeo in Harlem in the 1970s. 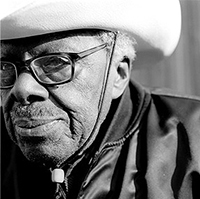 The leader of these cowboys is Morse, a retired state government employee with hair in locks that reach down her back to below her knees. Fellow Cowboys call her “Mama.” She’s one of three female members in the aging group of horse buffs, who numbered about 60 when they were officially incorporated in 1998.

Morse grew up in Brooklyn’s Fort Greene neighborhood, where she watched her father riding in Prospect Park on visits from equestrian competitions around the world.

The city license for the Cedar Lane Stables and corral was initially suspended three years ago, when the Cowboys faced claims that the 11-acre premises and some of the animals had been neglected. Six horses died in 2012. The Cowboys said individual horse owners were responsible.

Having to clear out was “devastating,” Morse said. Members had to move their horses. Some never returned.

The stables were renovated, and the Cowboys got their license back in 2014, on the condition that they be directly responsible for each animal’s welfare. They pay about $400 a month to maintain each horse on the property, owned by the Department of Parks, which issues licenses to private city food services or recreation organizations.

However, the city acknowledged the Black Cowboys’ “positive historical contribution to the community and to horse riding in New York City.”

Signaling some hope for the future of the federation is Marquise Jemmott, who at 22 is the youngest group member. He also has a special skill: horseshoeing, a trade he learned from master farrier Tom Hannaberry, who has tended to Cedar Lane hooves for more than 30 years.

Morse is in the process of planning the future alongside GallopNYC, but she’s not sure exactly what role the federation will play.

She hopes more young people will become members, helping to maintain the stables while being kept off drug-infested, violent city streets that take the lives of some of their friends or send them behind bars.

“Being a cowboy or a cowgirl is more than the attire,” Morse said. “It means being able to roll up your sleeves and work.