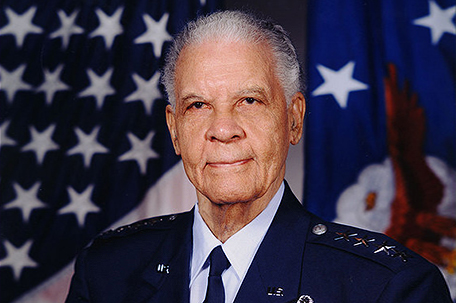 WEST POINT, N.Y. –– The newest cadet barracks, expected to be completed in late 2016, at the U.S. Military Academy, will be named in honor of Gen. Benjamin Oliver Davis Jr., Class of 1936.

“General Benjamin O. Davis Jr., epitomizes the essence of character and honorable living we strive to inspire in every cadet at West Point,” said Lt. Gen. Robert L. Caslen, superintendent. “It is particularly fitting that today, on the 213th anniversary of the founding of the academy, that we make this announcement and pay tribute to his demonstrated acts of perseverance, courage and humility throughout a lifetime of selfless service to the nation,” continued Caslen.

Davis was a pioneer of his time. Despite being “silenced” during his four years at West Point, where no cadets, faculty or staff members befriended or spoke to him except on an official basis, he persevered to become the fourth African-American to graduate from West Point and the first in the 20th century graduating 35th in his class that numbered 276. His ambition was to enter into aviation but due to segregation, he would wait until 1941 to be accepted as one of the first Tuskegee Airmen, earning aviation wings one year later.

As a lieutenant colonel during World War II, he commanded the 99th Pursuit Squadron flying P-40 Warhawks. Following promotion to the rank of colonel, Davis assumed command of the 332nd Fighter Group known as the legendary “Red Tails” flying P-51 Mustangs and P-47 Thunderbolts. Under his leadership, the unit was commended for its outstanding combat record and was held in such high regard for their discipline and performance that they were sought by bomber crews to escort the most dangerous missions over Germany.

Davis was awarded the Silver Star, Distinguished Flying Cross and Air Medal for meritorious service and gallantry. It was his continued obsession with flight that led him to transfer from the Army to the U.S. Air Force in 1947 when the new service was established. There, he led the development of policy improvements for ethnic integration in 1948 and spent the next two decades as a prominent leader in the Air Force focused on ensuring equal treatment and opportunities for all. After commanding the 51st Fighter Interceptor Wing, in Korea, he held various command and staff positions before culminating his service time as a lieutenant general and the 13th Air Force commander, Clark Air Base, Philippines. This West Point graduate internalized Army values with a persistent sense of duty and resilience and became a leading innovator behind the development of the modern Air Force.

After Davis retired in 1970, he continued to serve with distinction and was appointed deputy secretary of the Department of Transportation. In 1995 he was awarded the Distinguished Graduate Award by the U.S. Military Academy’s Association of Graduates.

Davis’ final promotion to Four-Star General in the Air Force occurred on December 9, 1998, in the Old Executive Office Building in Washington, D.C.  At the time, President Bill Clinton praised General Davis and the rest of the original Tuskegee Airmen in attendance for their service.

“To all of us, General Davis, you are the very embodiment of the principle that from diversity we can build an even stronger unity and that in diversity we can find the strength to prevail and advance,” Clinton said. “If we follow your example, America will always be strong, growing stronger. We will always be a leader for democracy, opportunity, and peace. We will be able to fulfill the promise of our founders, to be a nation of equal rights and dignity for all, whose citizens pledge to each other our lives, our fortune, our sacred honor, in pursuit of that more perfect Union.”

A formal dedication ceremony will be determined at a future date.