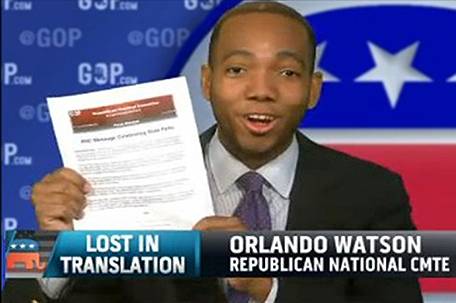 Called upon to defend the Republican National Committee’s faux pas in describing racism as being dead, Orlando Watson, the RNC’s newly appointed Black communications director for Black media, instead launched into an attack against President Barack Obama.

Long criticized for being more of an exclusive club rather than a big tent when it comes to African Americans and other minorities, the GOP conducted an autopsy to figure out why they couldn’t connect with voters in the 2012 elections, and, under Chairman Reince Priebus, has begun making outreach to the communities they previously marginalized.

But the Dec. 1 posting on the RNC’s Twitter account was labeled “tone deaf” by an MSNBC show host and has many observers questioning whether the party can connect with minorities after all.

“Today we remember Rosa Parks’ bold stand and her role in ending racism,” the tweet read, referring to the 58th anniversary of the seamstress’ arrest for defying a Montgomery, Ala. bus segregation law that sparked the modern-day Civil Rights Movement with the 13-day Montgomery Bus Boycott in 1955.

The group followed up the message with a correction: “Previous tweet should have read ‘Today we remember Rosa Parks’ bold stand and her role in fighting to end racism.’” But, the damage was already done.

“It speaks to the lack of connection and the fact that internally there is no objective oversight; there’s no one looking at that with a Black voice, if you will, who can say…this is historically incorrect and factually wrong, but more importantly, it’s dumb. It’s not going to resonate with the audience you’re trying to reach,” said former RNC Chairman Michael Steele, who is African-American, on MSNBC’s “Hardball.”

Further pushed about Republican-led efforts to disenfranchise minority voters, Watson said, “That’s simply not true…. We’ve been engaging Black voters. We’ve been going into the community, showing up; meeting people in the places where they meet…work…[and] worship.”

For example, he said, RNC leaders have been going places where they may not have gone before. Last month, Chairman Reince Prieubus was in Detroit meeting with Black business and community leaders and also visited New Orleans, where he met with Black parents and students who are recipients of a Louisiana scholarship program that is geared toward low-income families.

The MSNBC host, however, continued to challenge Watson about the RNC’s commitment to African Americans, this time, in light of Republicans’ persistent attacks against the Affordable Care Act. Thomas cited a New York Times report showing that almost 60 percent of African Americans live in states led by Republican governors, almost all of whom refuse to expand Medicaid coverage under the ACA.

Asked if that position was “defensible,” Watson responded, “What I don’t find defensible is after five years of living under President Obama he has little to show for what he’s done for the Black community.

“And if you want to focus on his health care law,” he continued, “his health care law has cost jobs, particularly jobs in the Black community. And he’s done little to speed up the job prospects of millions in Black America and millions of Americans across the country. So while we’re focused on trying to create jobs—private sector jobs, good-paying jobs, career-making jobs—I would ask, ‘What exactly has the president done for the Black community?”