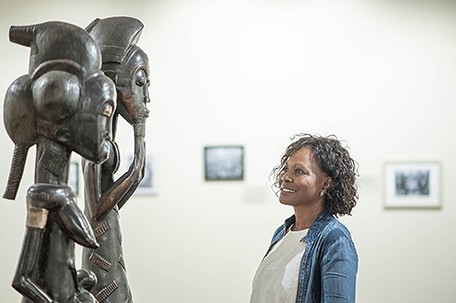 ABOVE PHOTO: In this Aug. 29, 2019 photo, University of New Mexico professor Sherri Burr, a black descendent of Aaron Burr the third vice president of the United States, stands before a sculpture at the exhibit “400 Hundred Years of Freedom, Restrictions and Survival,” hosted by the African American Performing Arts Center in Albuquerque, N.M. (Roberto E. Rosales/The Albuquerque Journal via AP)

ALBUQUERQUE, N.M. — When Sherri Burr was a child, her grandmother and great-grandmother told her there was something special about her family.

“It was a big secret,” Burr said in an interview last week. “My brother and I were told there was something special about our family name,but we were never told what it was.”

In 2013, the University of New Mexico law professor was working on a book about intellectual property rights when she happened to look up records for her great-aunt who lived and died in Wyoming.

That seemingly simple task dovetailed into a six-year research project that would uncover the long-held secret. Burr has learned through historical research and DNA testing that she is a descendant of Aaron Burr, the third vice president of the United States, who is notorious for fatally wounding Alexander Hamilton in a duel.

Sherri Burr’s work was recently recognized by the Aaron Burr Association, has been included in one published and one forthcoming book, and is referenced in Burr’s current exhibit at the African American Performing Arts Center in Albuquerque. The exhibit commemorates the 400th anniversary of the arrival of enslaved Africans on the Eastern Seaboard of what would become the United States.

Burr, 59, has traced her heritage to John Pierre Burr, who has now been officially recognized as the son of Vice President Aaron Burr and Mary Eugenie Emmons, a servant in the Burr household from Calcutta, India.

John Pierre Burr lived in Philadelphia, where he was publicly a barber and privately a conductor on the Underground Railroad, working with Harriet Tubman to guide enslaved Blacks to freedom.

“I was most concerned with getting John Pierre his due,” Sherri Burr said. “We’re celebrating the 400th year this year, and these broken links of paternity affected all these African families, and (John Pierre Burr) is part of that. I think it’s important, even if it’s only one example, to symbolically connect a parental link to someone who could not be recognized at the time of their birth.”

Earlier this month, Philadelphia’s Eden Cemetery put up a new headstone that honors John Pierre Burr’s accomplishments and recognizes him as the former vice president’s son.

“A few people didn’t want to go into it, because Aaron’s first wife, Theodosia, was still alive and dying of cancer” when the Newark, New Jersey-born Aaron Burr fathered John Pierre, Stuart Fisk Johnson, the president of the Aaron Burr Society, told The Washington Post. “But the embarrassment is not as important as it is to acknowledge and embrace actual living, robust, accomplished children.”

Burr joined University of New Mexico’s faculty as a law professor in 1988. She retired from her full-time teaching position and became a professor emeritus in 2017 so she could devote more time to research.

“It’s sort of like working with puzzles but not having a frame,” she said of the process.