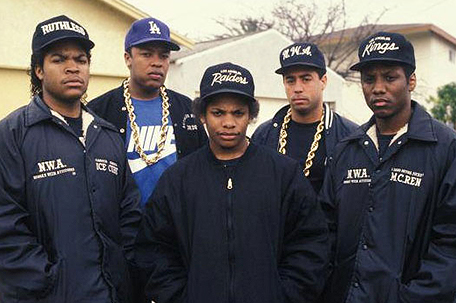 In 2006, Anana and other hopeful activists held a well-publicized funeral for the n-word in Beloit. But like the mythical hydra that grows two heads when one is severed, the word came back with a fury.

Anana calls the packaging and selling of the word to white kids for profit as a “subtle form of racism.”

“Instead of helping us get rid of racism, they’re perpetuating it through our popular culture,” she says of music industry executives. “How sick is that?”

While the use of the word might not raise eyebrows with young rap fans, it’s generating a stir in mainstream media. In recent weeks, white high school seniors at a Georgia school made news when they hung signs reading “Nigga we made it” to celebrate their graduation. In 2012, actress Gwyneth Paltrow caught some grief when she tweeted “Ni**as in paris for real!” from a Jay-Z and Kanye West concert where they performed their song by the same name. And earlier this year, singer Madonna was criticized for referring to her son on Instagram as “#disnigga.”

Brown points out that the popular use of the word “nigga” has a different connotation than its evil cousin, “nigger,” which when used by whites, continues to carry the baggage of centuries of oppression.

But should whites be using any form of the word at all?

“White kids, justifiably so, have a right to question: If you’ve embraced this as a term of endearment, and N-I-G-G-A doesn’t mean N-I-G-G-E-R to you, is it OK for me to use it?” says Brown. “Or should it be OK?”

Someone who doesn’t think it’s OK is Blake Broadnax, one of only 11 African-Americans among the 600 students at Edgewood High School this past school year — that is, until he left in December after 2 ½ years because he couldn’t take the racial tension anymore.

Broadnax, 16, contends that many of the racial incidents that prompted him to leave were out-and-out racial harassment. But often he bristled at the use of the n-word.

“I got to the point I was expecting it to happen,” he says of racial incidents. “And the few days it didn’t I was almost confused, like why didn’t it happen? I would just be anticipating it so much, and then when it would happen I was almost relieved. I’d be like ‘OK, now I can get on with my day now.’ I knew at least one thing would happen and it was usually the n-word floating around.”

Broadnax contends that he’s experienced both n-words at Edgewood. Well, make that three. He also says he’s repeatedly been called a “niglet.” And he’s certain that in many of those instances, no matter what form the n-word took, there was no mistaking the toxic connotations of servitude and inferiority that historically accompany the word in its cruelest form.

Blake Broadnax says he heard the n-word every day at Edgewood High School this past school year.

Broadnax and his family are considering a lawsuit against the school for not doing enough to address the incidents, or to change the culture at Edgewood.

Edgewood principal Robert Growney maintains the school responded appropriately to Broadnax’s complaints of racism and he refused to talk about Broadnax’s specific complaints. He acknowledged, however, a recent uptick in the use of the n-word in the school’s halls.

“One of the things we’ve noticed in the last two or three years, the hip-hop rap music, with some of that music the n-word is used quite a bit,” he says. “And kids will test each other with that dynamic. Not in a direct way, but they say, ‘It must be OK because it’s on radio.’ We continue to battle that.”

Those familiar with rap music are quick to point out that the use of the n-word is nothing new. Niggaz Wit Attitudes (NWA) debuted in 1986, part of a gangsta rap genre that shocked the music world with explicit lyrics. But there’s something different about the word “nigga” as it’s used today, a word whose most shocking aspect is that its historical context has been blunted by corporate marketing and repetition.

“Now we’re some years down the road,” says Davey D. “So it’s to the point that when you do raise the issue somebody will now look and say, ‘We have 20 years of material that says this really isn’t an issue so let’s let it continue.’ Now it’s tradition. Now suddenly you’re the bad guy for voicing the concern.”

There’s another factor at work, he says: artistic mediocrity.

“When I hear artists that are using the n-word every two lines, it’s lack of skill set,” he says. “You don’t have anything to say, you haven’t perfected your skill to where you don’t have to rely upon these words.”

He likens the word to curse words that through the decades have made their way into the popular speech.

“For some people, using the word has become a habit and it’s no different than any other curse word that’s out there,” he says. “A lot of times in my speech I might use the word motherf— — a lot. You know, these mother—–s are just crazy. I use that. That’s a habit, right?”

But the baggage “nigga” carries is a lot heavier than mere crudeness, he says. And he’s dismayed at the way the record industry has marketed and promoted the word, while pressure from the gay and Jewish communities has significantly diminished the use of pejorative terms related to those groups from popular music.

Remember Turbo B? Davey D notes that his career took a nose dive after he made some anti-gay remarks in the ‘90s.

Or that line from Puff Daddy’s “It’s All About the Benjamins” — ”You should do what we do, stack chips like Hebrews” — later removed by the record label.

But African-American artists using the n-word to refer to other blacks for the entertainment of white kids? Different story.

“They’re at the height of when all this sort of crassness is in ways it wasn’t done before,” Davey D says. “Where everything is thrown out the window and it’s just about sales and it’s just about appealing to a demographic of people who like to hear ghetto tales but don’t want to go to the ghetto themselves.”

Davey D sees it as a sad state of affairs, and he’d like to see African-Americans effectively excise words and phrases that portray them negatively.

“The n-word, it’s a pejorative thing. I don’t care if it is other black people saying it,” he says. “I don’t want to have it on the airwaves. I don’t want the DJs, especially the non-black ones, to be able to use it and say that it’s slang. You currently have that situation where you have folks that use the word and then they fall back and they’ll say this popular artist used it so therefore it’s OK.”

Among many young people, however, the use of the n-word is a non-issue.

East High freshman Sincere Harris, an African-American, says she hears the word “all the time” at school, including from some white kids.

“It’s like the music is giving them the right to keep saying it,” Harris says.

While she says the word is overused, the fact that it is sometimes uttered by white kids doesn’t bother her.

“Some of them come here and they’re influenced by some of the African-Americans,” she says.

Andrew Smith, a white East High sophomore, says he hears the word at least a couple of times a day, usually, but not always, from African-American kids. He shrugs it off.

Middleton High School’s Brown says there’s one thing you can do: educate kids about the history of the word so they can make an informed decision on using it or not.

He says the school’s Diversity and Human Issues class recently devoted a 90-minute session to the n-word. About 150 kids went through the session.

“I think we have a lot of white kids, they hear it because they’re bombarded with it because of the music they listen to,” he says. “They really don’t understand the history of it, what’s associated with it, how ugly the institutions of slavery and Jim Crow were, and how ‘nigger’ was embedded in that culture of discrimination and oppression.”

Broadnax, the former Edgewood student, says white kids at that school are clueless about how to talk to African-Americans. Some, he says, would ask him why the word bothers him.

“There are a lot of kids who really didn’t know,” he says. “Especially the ones who went to Catholic middle schools. They’d never been around any African Americans.”

Brown says ignorance about the history of the word is shared by African American kids.

“They don’t have enough in-depth knowledge about their own history and how that word was used to keep us in our place,” he says. “We have a generation of young folk that really don’t understand how devastating that word was.”

Brown, who’s 40, has that knowledge. His father was involved in the civil rights movement in Mississippi and his aunt was one of the first blacks to integrate a previously all-white high school.

“I would never use that word, even in the ‘a’ form, around my family or my elders because I have respect for my history and those who experienced it and lived it,” he says.

But he’s also a child of the hip-hop culture and he sometimes lets it slip out when he’s with his friends.

“The word is embedded in my mind from listening to music of the ‘90s and the new millennium,” he says. “But I’m conflicted because I know that word is not a healthy word regardless of what we try to say.”

So he says he challenges his students to understand the word and justify its use, rather than trying to eradicate it from the schools.

“If I’m going to pick my battle I’m not going to waste all my time trying to erase the n-word,” he says. “I’d rather deal with institutions and structures that have barriers that prevent all people from having access and opportunities.”