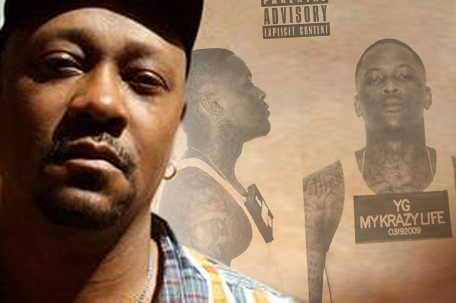 ABOVE PHOTO: Davey D with YG “My Krazy Life” album cover in background.

You’re probably not going to like this, but I want to have a word with you. I should warn you, it’s a bad word, one that most of us were brought up to treat as unutterable in civilized society. But here it is:

That word might offend you, but it’s a common shout-out between young African Americans, a term of endearment that has a decades-long history in the world of popular culture. The word has gained unprecedented popularity in recent years among young hip-hop fans, who hear it with a frequency that verges on the absurd.

“I struggle listening to current-day hip-hop because it’s just all over the place,” says Percy Brown, diversity and student engagement coordinator with the Middleton-Cross Plains Area School District and dean of students at Middleton High School. “It hurts my ears.”

To get an idea of what he’s talking about, I recently looked at the Billboard Hot Rap Songs chart. Seven of the songs contained repeated use of the word.

Here’s a sampling of the lyrics from last year’s hit, “My Nigga” by YG:

“My nigga, my nigga

Other titles: “Niggas in Paris,” “My Nigga Just Made Bail,” “Lookin Ass Nigga.”

Listening to mainstream hip-hop today means not just hearing the n-word, but hearing it ad nauseam. That fact infuriates those who have long fought the word’s use and dehumanizing meaning and use of it by by pop culture-obsessed kids has predictably raised issues at Madison schools, where students say they hear the word every day. One student at Madison’s Edgewood High School heard it so often, he considered it harassment, left the school and his family is considering legal action.

Madison East High freshman Alex Lara, who is not African-American, says he hears the word at school “a lot.”

But he points out that a small number of students say it, those who “listen to a certain type of music.”

Lara listens to hip-hop, too, but he’s conflicted about the word. It might pass his lips if he’s singing along to a song, but “that’s about it.”

Most of those who use the word are African-American, but not all of them, Lara says. And nationally, white kids are using the word more and more.

“We know that white teenagers are the biggest consumers of hip-hop, so they are bombarded with the n-word,” Brown says.

“I don’t think it’s anything that’s been a highly prevalent issue within our district with the powers that be,” says Stewart, an African-American and coach of the West boys basketball team. “But it’s one of those things, on a personal level, when I hear it, I call students on it. We work with students on that sort of thing, try to abolish that.”

He says he never hears the word from white students.

Davey D, a San Francisco-based hip-hop historian, radio personality and media justice advocate, says he hears it from non-African-Americans all the time.

That some think it’s acceptable to use the n-word infuriates those who have battled the use of the word their entire lives.

“You can’t use an offensive word, a word that was born out of hatred and turn it into an endearing word of love,” says Milele Chikasa Anana, publisher of Umoja, a Madison African-American culture magazine.