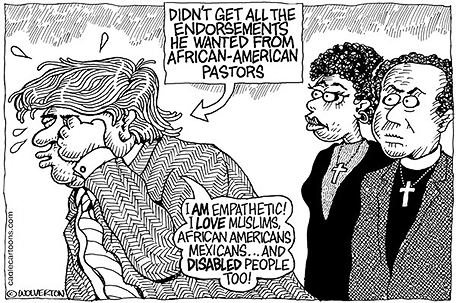 The National Black Church Initiative (NBCI), a faith-based coalition of 34,000 churches comprised of 15 denominations and 15.7 million African Americans, cannot sit by and allow GOP presidential candidate Donald Trump to verbally assault every ethnic group who make up the fabric of our country.

He has assaulted Blacks, Mexicans, Latinos, Muslims and anyone who he believed is not contributing to America or not American. For whatever reason, he has assaulted everyone except for poor whites. Donald Trump is clearly dividing us by giving one group of American a false sense of superiority thus indicating the rest of us are unAmerican.

Scapegoating an entire group of people is the worst form of bigotry. Donald Trump is playing to our lowest common denominator as he has sought and continues to seek to divide us by income, race, religion and political ideology. What disturbs us more is that there has not been a majority of people of goodwill who have stood up to denounce this dangerous rhetoric and hate filled speech. Has our country become so oblivious to this type of behavior that we forfeit the character of humanity which binds us together in the greatest nation on Earth? Has our country become so immune to this type of behavior that we are willing to have the principles of free speech compromised and redefined at the expense of the integrity of American citizenry?

Furthermore, Donald Trump calls himself a Christian, but his behavior toward fellow Americans has been unChristian, uncharitable and, in some cases, downright evil. The Black Church will not stand for this type of derogatory behavior and remains unafraid of Donald Trump and his hate filled rhetoric. Our history shows the Black Church has collectively fought to overcome racism and racist ideology and people. Through the compelling use of moral goodness, prayers, and votes, we the Black Church have paralyzed and immobilized racist and immoral giants. We will do the same with regards to Donald Trump.

Thus, for the sake of the collective good of American society, we believe Donald Trump should drop out the race for the 2016 Republican Party Presidential Nomination. He is not good for America. While freedom of speech allows him some leverage in affording him some rights to be able to say anything he wants, we also have the right to oppose him.

That is the essence of America and that is why we call for Donald Trump to remove himself from the Primaries. The need to maintain the high integrity of our American society requires a different tone and a different kind of leader.

The Rev. Anthony Evans, president of the National Black Church Initiative said “We are not going to let Donald Trump or anyone else assault black people or any other groups. We will oppose him and others through our moral goodness. He is the biggest racist since Bull Conner and we believe Donald Trump should drop out the race.” As you might recall, Bull Conner was determined to kill or lock up every black that spoke against his racist concept of America.

Similarly, Donald Trump believes that he can rid America of everyone who does not agree with his fascist ideology.

Donald Trump is a cancer on our democracy and the pervasiveness of this cancer must be cut out using the fervent tools of prayer, votes, and moral authority. The Black Church has to exercise its moral authority by speaking against this ugliness of the rhetoric expressed by Trump. We must be to not let him destroy this great America experiment for humanity.

The Black Church prays for the responsiveness and attentiveness of congregants and to utilize the power of the vote to remove Donald Trump from those contenders vying for highest office in our great land. We can all disagree with everyone without undermining the humanity of anyone. Donald Trump does not meet the basic litmus test.

The National Black Church Initiative (NBCI) is a coalition of 34,000 African American and Latino churches working to eradicate racial disparities in healthcare, technology, education, housing, and the environment. NBCI’s mission is to provide critical wellness information to all of its members, congregants, churches and the public. Our methodology is utilizing faith and sound health science.

NBCI’s purpose is to partner with major organizations and officials whose main mission is to reduce racial disparities in the variety of areas cited above. NBCI offers faith-based, out-of-the-box and cutting edge solutions to stubborn economic and social issues. NBCI’s programs are governed by credible statistical analysis, science based strategies and techniques, and methods that work.