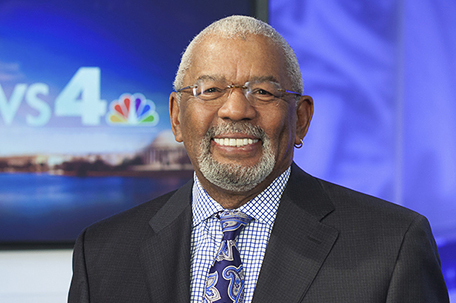 ABOVE PHOTO:  This undated photo from WRC-TV shows longtime news anchor Jim Vance. Vance died Saturday, July 22, 2017 at the age of 75, the NBC station said. Vance told viewers earlier this year that he was undergoing treatment for cancer.  (Robin Fader/WRC-TV via AP)

“It’s a sad day in American journalism. The passing of legendary journalist Jim Vance has struck a chord with the nation and rightfully so as he was a pioneer and role model among the nation’s top broadcasters,” said NABJ President Sarah Glover, NBC Owned Television Stations Social Media Editor. “As one of the first African-American primetime anchors in a major television market, Vance was an impeccable deliverer of news, keeping the citizens of Washington informed for 45 years. He inspired multiple generations of African-Americans to pursue journalism as their craft. His beautiful spirit touched everyone he met and lives on in the scores of working journalists he mentored.”

Vance joined WRC-TV in 1969 as a general assignment reporter. He became an anchor for the station three years later in 1972. He served as the station’s main anchor primarily co-anchoring the station’s 6p.m. and 11p.m. newscasts. Vance gave up his 11pm anchor duties only recently but continued to anchor, report, and offer his incisive commentary in a segment dubbed “Vance’s View.”

Earlier this year Vance announced that he had received a cancer diagnosis and was undergoing treatment. He said at the time, “I love what I do. I love the people with whom I am privileged every day to do it.”

“For more than 45 years, Jim Vance was not only the soul of NBC4 but of the entire Washington area. His smooth voice, brilliant mind and unforgettable laugh leaves each of us with a tremendous void. Vance always celebrated the good and acknowledged the parts of life that didn’t go so well. That made him a great man,” Jackie Bradford, NBC Washington President & General Manager said in a statement.

“We have lost a giant. Jim Vance was a well-respected anchor, not only in DC but across the country. He was the consummate journalist we all admired and longed to emulate. He will be missed,” said NABJ Board Vice-President of Broadcast Dorothy Tucker.

NABJ was honored to induct Vance into the Association’s Hall of Fame at our annual convention in 2007.

NABJ’s thoughts are with Jim Vance’s family, his colleagues and friends during this difficult time.