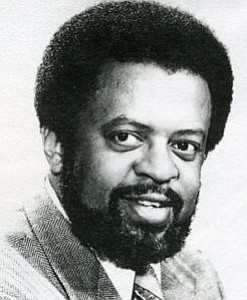 Lewis was a highly respected journalist and mentor to many journalists. Born and raised in Bronx, he attended New York City public schools and graduated from City College with a degree in English. Lewis worked as an editor and reporter for newspapers and magazines, such as Newsweek, New York Herald Tribune, and The Philadelphia Bulletin.

He taught at Villanova University and also wrote a column for The Bulletin until it folded in 1982. Later, Lewis wrote a syndicated column for the Philadelphia Inquirer.

“This is a very sad day. Claude was a great mentor for me at The Bulletin. He always had time to talk with a young journalist trying to navigate the newsroom. He was the calm spirit that guided many of us,” said former colleague and NABJ Founder Sandra Dawson Long Weaver.

Known as one of the “original three,” Lewis along with fellow Philadelphia journalists Chuck Stone and Acel Moore laid the groundwork for and later founded the Philadelphia Association of Black Journalists (PABJ) in 1973. Lewis and many of PABJ’s early members contributed to the formation of NABJ in 1975 in Washington, D.C.

“Founder Claude Lewis was a gentle giant and kind soul whose passion for equality and equal opportunity can be seen in his columns and life’s work. He had a personal impact on the trajectory of many NABJ members, myself included, showing us all the way,” said NABJ President Sarah Glover.

“Claude lives on in all of us. I thank him for instilling in me, and my peers, a deep level of tenacity and commitment to the cause.”

Lewis had an extensive career in broadcasting, writing and producing various TV specials and documentaries with NBC and Westinghouse Broadcasting. In 1982, he founded the first national African-American newspaper, The National Leader.

NABJ Founder Joe Davidson worked with Lewis at The National Leader and first met him when both worked at The Philadelphia Bulletin.

“Claude was an important force in journalism in the 1970s. He meant a lot to me personally and to a lot of black journalists professionally,“ Davidson said. “He lured me away from The Inquirer to work as managing editor at The Leader. It was an opportunity to serve the black community with high quality journalism. I was really proud of the work we did together on that newspaper,” Davidson added.

Lewis covered the Civil Rights Movement in the 1960s, meeting and interviewing such icons as Langston Hughes, James Baldwin, Malcolm X and Martin Luther King, Jr. In 1968, Lewis left a meeting in Philadelphia to join the King family in Memphis immediately after receiving the news that King was shot.

“Claude was a journalist miles ahead of his time, and he achieved recognition long before many recognized him,” said NABJ Founder Paul Brock.

“I remember Claude as a friendly and encouraging colleague when we worked together at the Philadelphia Inquirer. His door was always open and he didn’t hesitate to share his contacts, expertise and advice to young journalists. He and Acel were like these twin towers of black journalism excellence in Philly. We should honor them by continuing their tradition of being fierce advocates for the truth, especially in this current political climate,” Williams said.

NABJ extends its sincerest condolences to Founder Lewis’s family and the countless friends within the journalism community who he leaves behind.

Lewis is survived by his wife Beverly, four children, five grandchildren and four great-grandchildren. A memorial service is planned for a later date.

###
An advocacy group established in 1975 in Washington, D.C., NABJ is the largest organization for journalists of color in the nation, and provides career development as well as educational and other support to its members worldwide. For additional information, please visit www.nabj.org.