NABJ to bring 2019 and 2021 conventions to Miami and Houston 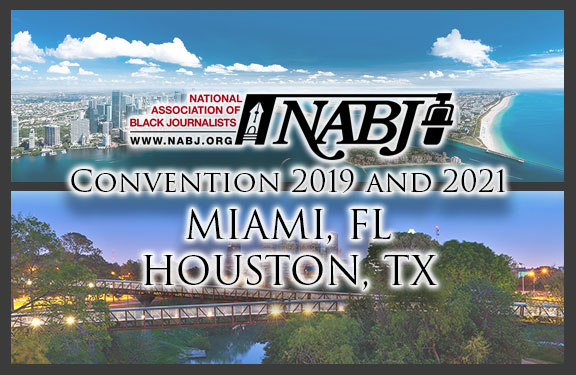 WASHINGTON, D.C. (Jan. 31, 2018) – The National Association of Black Journalists (NABJ) announces the selection of Miami and Houston as convention host cities for the 2019 and 2021 NABJ Convention and Career Fairs, respectively. The final city selection follows a thorough process that is in alignment with a priority objective outlined in the NABJ Strategic Plan 2017-2020.

“I am extremely excited that cities like Miami and Houston realize the value of NABJ’s convention,” said NABJ Board President Sarah Glover. “We know our membership will be impressed with the package that has been presented and we’re looking forward to an exciting, productive and mutually beneficial experience in Miami and Houston.”

Each year, the convention draws more than 3,000 attendees to participate in a five-day slate of career development programs, events and networking opportunities.

“Our skill-based programming and career fair, at the NABJ convention is one of the most sought-after opportunities for professional growth and development. To be held in two ideal destinations where there are strong NABJ chapters and leadership is significant,” said Glover. “Thanks to a very progressive and forward-thinking strategic planning committee, we had a very detailed and focused process that ensured a successful outcome.”

The NABJ board of directors and staff conducted a formal, transparent and thorough process for convention city selection. At the forefront of consideration was NABJ’s financial and organizational sustainability, which resulted in a competitive process where interested cities presented formidable proposals through a Request for Proposal (RFP) process. NABJ engaged with 36 prospective cities and more than 100 hotels.

Miami-Dade County Mayor Carlos A. Gimenez has confidence that NABJ’s favorable decision for Miami will result in success. “As Mayor of Miami-Dade County, I am delighted NABJ has selected our destination for its 2019 Convention and Career Fair. We look forward to welcoming the NABJ delegates to our vibrant, diverse, cosmopolitan community and are ready to make the 2019 NABJ Convention and Career Fair the most memorable and successful ever,” said Gimenez.

The factors culminating in Miami and Houston’s successful bids enable NABJ to keep convention costs down, and they include competitive accommodation rates; workshop and exhibit space; concessions; city and regional support; local attractions; and travel accessibility, as well as the cultural and social fabric of these cities. Both cities also have vibrant NABJ affiliate chapters.

“A few weeks ago, I had an opportunity to visit with members of the NABJ board of directors who were in town to hear convention proposals from various cities across the country,” said Turner. “I stressed that in 2017 Houston hosted a Super Bowl; survived a hurricane; and celebrated World Series champions, the Houston Astros. We have faced challenges and celebrated championships, and as a result, we are more resilient. It makes sense that an organization like NABJ chose Houston to host its 2021 convention.”

Glover expressed enthusiasm over the entire process, and applauded the NABJ board members and staff for their due diligence. She also thanked all the cities that presented proposals, demonstrated interest and participated in the RFP process.

“The response from cities across the country was overwhelming and we were excited by all of their efforts to secure NABJ’s business,” said Glover. “Thanks to the efforts of the strategic planning committee and the NABJ staff, we have developed a model that will ensure success of our conventions in the future.”

In 2015, the NABJ Board 2015-2017 embarked on the development of a strategic plan to strengthen the organization’s infrastructure and viability. The Strategic Plan Implementation Committee, chaired by NABJ Founder William Dilday, was formed with the task of advising the board of directors on execution of the plan. Among several priority areas outlined in the strategic plan is revising NABJ’s convention site selection process by establishing criteria for hosting conventions.

In April 2017, the NABJ board of directors began the selection process by identifying 10 cities as key to future successful conventions, signaling to the hospitality and convention industries our vital selection framework. The formal convention site selection process that followed, resulted in a healthy and competitive process open to all cities as intended. The selection of Miami in 2019, and Houston in 2021, is the culmination and realization of this key objective in the NABJ Strategic Plan 2017-2020.

NABJ has held its convention in Houston twice, in 1976 and 1993, and once in Miami, in 1987. Past NABJ Convention speakers include U. S. President George W. Bush; U. S. Senator Barack Obama; and Secretary of State Hillary Clinton.

The city selections are not final until contracts have been negotiated and finalized.About the National Association of Black Journalists

An advocacy group established in 1975 in Washington, D.C., NABJ is the largest organization for journalists of color in the nation, and provides career development as well as educational and other support to its members worldwide. For additional information, please visit www.nabj.org.