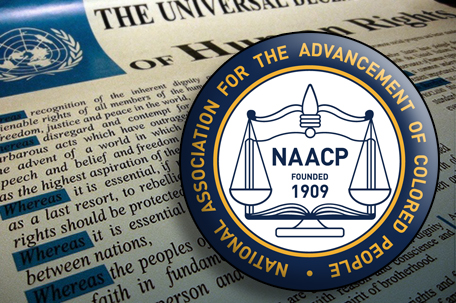 An NAACP delegation will take the concerns of minority communities in the United States to the UN Human Rights Council’s review of the International Covenant on Civil and Political Rights, scheduled to take place in Geneva, Switzerland from March 9 to 15.

The International Covenant is a treaty that outlines broad and fundamental civil and political rights that should be available to all people, including the right to self-determination, the right to participate in the electoral process, the right to due process and a fair trial, the right to freedom of speech and religion, and the right to be free from slavery and torture, among others.

“As you can imagine, an oversight audit of a treaty signed by the United States along these lines is particularly important and crucial to the mission, goal and challenges of the NAACP,” said Hilary Shelton, the NAACP’s senior vice president for Policy & Advocacy and director of the Washington Bureau. “Going to the United Nations and participating in this process is a way for us, at the NAACP, to see to it that as the UN is evaluating the effectiveness of what the United States has been able to do to meet these goals and its promises…that voices from our communities are also heard.”

One of the key issues the organization plans to address is the abrogation of voting rights in the United States.

“We intend to raise our continued concern with voter suppression laws that are taking place at state and local levels across the United States,” said Jokata Eaddy, NAACP senior director for voting rights. “We will also raise the issue of the denial of voting rights to District of Columbia residents, and the continued practice of felony disenfranchisement.”

Last September, the NAACP, in partnership with the American Civil Liberties Union, the ACLU of Florida, the Lawyers’ Committee for Civil Rights Under Law, the Leadership Conference on Civil and Human Rights, the NAACP Legal Defense and Educational Fund, and the Hip Hop Caucus, co-authored a shadow report on felony disenfranchisement, or the removal of voting rights due to previous criminal convictions. That report was submitted to the UN Human Rights Committee ahead of the review.

According to that report, 7.7 percent of Black adults, or one in 13 people, are disenfranchised. In Florida, Kentucky and Virginia, that number rises to one of every five people. Nationwide, a total of 2.2 million African Americans cannot cast a vote because of involvement in the criminal justice system, 40 percent of whom have concluded their sentences.

“Denying citizens the right to vote is counterproductive to any goal of successful re-entry and of lowering recidivism rates,” said Jessica Chiappone, vice president of the Florida Rights Restoration and an ex-felon who was unable to take the Florida Bar exam because of her conviction on conspiracy to possess cocaine charges 15 years ago. “People like me are already punished once through the criminal justice system and once we serve our time we shouldn’t be further punished for the rest of our lives.”

The NAACP also co-authored another shadow report advocating the repeal of “Stand Your Ground” laws.

“These laws make it easier for people to murder other human beings without facing legal consequences,” the report stated. “They essentially eviscerate any deterrent to gun related homicides, and provide a road map to getting out of jail with blanket immunity.”

The 30 shadow reports submitted to the UN council address a range of issues, including living wage, stop-and-frisk policies, food insecurity, violence against women, human trafficking, the death penalty and more.