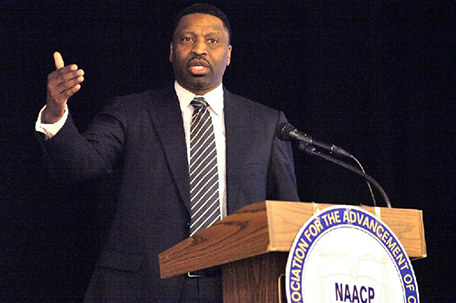 BALTIMORE – The NAACP, the nation’s oldest and largest nonpartisan civil rights organization, names vice chairman of the board of directors Derrick Johnson as interim president and CEO, effective immediately. The unanimous decision was made by the executive committee of the board of directors during the Association’s 108th annual convention in Baltimore. The NAACP released the following statement:

“I am thrilled to announce that my friend and colleague Derrick Johnson has been appointed to interim president and CEO. I could not think of a better, more battle-tested or more qualified individual to guide the NAACP through this transition period,” said Leon Russell, Board Chairman of the NAACP. “Derrick’s longtime service with the Association will allow him to take decisive action to deal with daily challenges. He will also serve as the primary spokesman for the NAACP. I have every confidence in Derrick and will support him in this new endeavor every step of the way .”

“It is truly an honor and a privilege to be named the interim president and CEO of an organization that I’ve served for decades,”  Johnson said. “There’s a lot of work that needs to be done and we won’t waste any time getting to it. We are facing unprecedented threats to our democracy and we will not be sidelined while our rights are being eroded every day. We remain steadfast and immovable, and stand ready on the front lines of the fight for justice.”

A longstanding member and leader of the NAACP, Mr. Johnson will guide the Association through a period of re-envisioning and reinvigoration. Until a new president is selected, he will serve as the NAACP’s primary spokesperson.

A Mississippi native, Johnson attended Tougaloo College in Jackson, Mississippi. He then continued onto Houston, Taxas to receive his juris doctorate from the South Texas College of Law. In later years, Johnson furthered his training through fellowships with the Congressional Black Caucus Foundation, the George Washington University School of Political Management, and the Massachusetts Institute of Technology (MIT). He now serves as an adjunct professor at Tougaloo and as an annual guest lecture at Harvard Law School, lending his expertise to Professor Lani Guinier’s course on social movements.

Johnson is a veteran activist who has dedicated his career to improving defending the rights and improving the lives of Mississippians. As State President of the NAACP Mississippi State Conference, he led critical campaigns for voting rights and equitable education. He successfully managed two bond referendum campaigns in Jackson, MS that brought $150 million in school building improvements and $65 million towards the construction of a new convention center, respectively. As a regional organizer at the Jackson-based non-profit, Southern Echo, Inc., Johnson provided legal, technical, and training support for communities across the South.

In the wake of Hurricane Katrina, Johnson founded One Voice Inc. to improve the quality of life for African- Americans through civic engagement training and initiatives. One Voice has spawned an annual Black Leadership Summit and the Mississippi Black Leadership Institute, a nine month training program for community leaders.