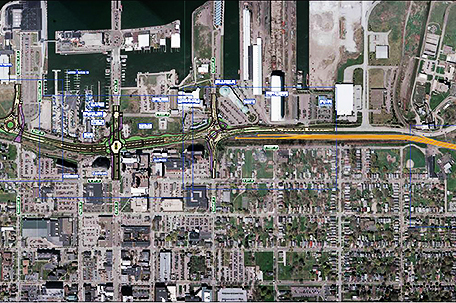 Pennsylvania’s plan to upgrade a major road along the city of Erie’s waterfront will wind up reducing pedestrian and cyclist access to the bay and disproportionately harm minority and low-income residents who live nearby, the NAACP charged in a federal lawsuit filed last Tuesday.

Years in the making, the $100 million Department of Transportation plan for the Bayfront Parkway envisions several roundabouts, pedestrian bridges and underpass lanes that PennDOT says will allow the highway to handle increased traffic volumes while improving neighborhood access to Presque Isle Bay.

In the lawsuit, the NAACP says the plan will do the opposite and the Bayfront Parkway — already a “fortified barrier” that severs downtown Erie from the waterfront — will become that much more of an impediment to the historically Black neighborhoods around it, while worsening air and water quality.

PennDOT has ignored residents’ concerns to barrel ahead with its plans, using a “shortcut environmental review process” illegally granted by the suit’s other defendant, the Federal Highway Administration, the plaintiffs said.

“With the Parkway project’s clear priorities of attracting conventions and out-of-town visitors, our voice and opinion about the character and needs of the neighborhood are being ignored once again,” Gary Horton, president of NAACP’s Erie chapter, said in a statement last Tuesday.

“We deserve to have the opportunity to comment on the parkway design and to be taken seriously by the entities looking to expand the parkway and increase traffic in our neighborhoods,” he said.

PennDOT declined comment on the lawsuit, which was filed by Earthjustice for the NAACP and PennFuture, an environmental advocacy group.

The state transportation agency has long defended the parkway project as essential to improving traffic flow, relieving projected vehicular congestion, and enhancing connections between the waterfront, residential neighborhoods and the central business district.

“The heart of the project seeks to better connect travelers of all kinds from the city of Erie to the bayfront,” Brian A. McNulty, the region’s top PennDOT official, wrote in August, adding that PennDOT has held numerous public meetings on the plan.

The NAACP and PennFuture want a judge to block federal funding for the Bayfront Parkway until PennDOT makes changes to the plan and complies with federal environmental law. The parkway project recently received $21 million in federal funding.

The parkway runs through a historic neighborhood once called New Jerusalem that was settled two centuries ago by free Black people who had escaped enslavement, the lawsuit notes.

Earthjustice attorney Jill Witkowski Heaps cast the lawsuit as “part of a larger reckoning” taking place across the country about how highways built through minority communities have “contributed to redlining and structural racism.” Such highways were designed to serve the needs of motorists but have decimated the communities through which they run, she said.