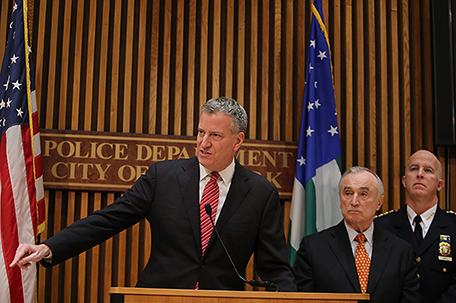 NEW YORK — Bill de Blasio, New York City’s first Democratic mayor in a generation, is winding down his first year in office, which saw success at fulfilling many of his liberal campaign promises but has at times been overshadowed by events beyond his control, most notably the recent killings of two police officers amid a wave of protests against police conduct.

De Blasio has appeared triumphant against some of those outside forces – notably during the Ebola scare – and has become a national progressive voice, but the police shooting has pushed his young mayoralty into its biggest crisis yet. The double slaying, which came weeks after a grand jury declined to indict an officer in the chokehold death of Eric Garner, has heightened de Blasio’s delicate efforts to support arguably his most important city agency, the New York Police Department, yet also defend the rights of the protesters who share his liberal values.

As 2014 draws to a close, his balancing act is teetering. Twice in a week, officers mourning their fallen brothers turned their backs on de Blasio, a searing display of contempt and an omen that de Blasio’s struggle with police could cripple his attempts to improve the fortunes of those living at the margins of the nation’s largest city.

“It’s extraordinarily tense and it’s not sustainable,” said David Birdsell, dean of the School of Public Affairs at Baruch College. “If the police dominate the headlines and his political capital rather than, say, his plan for affordable housing, it will remain a massive problem.”

Under former mayors Rudolph Giuliani and Michael Bloomberg, the NYPD largely went unchecked for 20 years, its power growing considerably after the Sept. 11 terrorist attacks. But de Blasio was a different voice, one who wanted to continue the historic drop in crime but prioritized improving relations between police and communities of color.

The unions heard his campaign promise to curb the use of stop and frisk – a police tactic a federal judge ruled discriminated against minorities – not as a criticism of strategy but rather as an assessment of the men and women of the NYPD. After Garner’s death, the police unions – which are seeking a new contract – roared against de Blasio’s close connections to the Rev. Al Sharpton, a noted police critic.

After the grand jury’s decision, de Blasio spoke about cautioning his own son, who is half-black, about contact with police, and he permitted anti-NYPD protesters to march freely. And when the two officers were gunned down Dec. 20 by a man who cited Garner as one of his motivations for violence, the unions said de Blasio had “blood on his hands” for fostering an atmosphere of anger toward police.

De Blasio has sought to lower the temperatures on both sides.

“Let’s focus on these families and what they have lost,” he said last week. “I think that’s the right way to try and build toward a more unified and decent city.”

Out went Bloomberg, the billionaire businessman who reshaped New York with his data-driven management style that made the city safe and glamorous yet economically stratified. In came de Blasio, who took the oath of office in front of his modest Brooklyn home, surrounded by his biracial family.

He campaigned on a pledge to reduce the city’s income inequality gap and worked in tandem with City Council to pass legislation aimed at bettering the lives of the less fortunate. Laws were passed to expand paid sick leave and living wage legislation, and the first steps were taken to create the nation’s largest municipal ID program.

His affordable housing plan aims to create or preserve 200,000 units in the next 10 years. And he struck labor deals with more than half the city’s workforce.

But the centerpiece of his agenda was a plan to massively expand universal prekindergarten. He aimed to fund it with a tax on the city’s wealthy, an idea that died in Albany.

However, his advocacy loosened $300 million from the state budget to launch the program. Dozens of city agencies combined on a smooth rollout and 53,000 4-year-olds entered the new pre-K classrooms in September.

There were stumbles along the way: A few snowstorms weren’t effectively plowed, the mayor’s constant struggles with tardiness caused him to miss a moment of silence at a memorial service for plane crash victims and one campaign promise he has yet to fulfill – to ban horse carriages – drew loud cries of anger from animal lovers, celebrities and tabloid front pages.

He also had one other rough moment with an animal: a groundhog he dropped at the city’s annual Groundhog Day event died weeks later (though its cause of death remains unclear).

Perhaps his crowning achievement was his steady hand after the city’s first Ebola diagnosis. Grounded in science, his calm demeanor reassured New Yorkers even as other political figures were all over the map in their approach.

“Running New York is also about handling situations that arise that are unimaginable and the mayor’s focus on running an effective and competent government has served the city well,” senior adviser Peter Ragone said.

His legislative accomplishments and big stage have turned him into a darling of the political left, a rising figure often cited along with U.S. Sen. Elizabeth Warren of Massachusetts as leaders of the Democratic Party’s most liberal wing. That position, plus his close ties to presumptive presidential front-runner Hillary Rodham Clinton, could place him in a visible role in 2016, particularly if his bid to land the Democratic National Convention in Brooklyn is successful.

“He is not hiding who he is: He seems very willing and able to push his liberal agenda forward,” said Matthew Hale, political science professor at Seton Hall University. “But he needs to manage this crisis. If he weren’t mayor, he’d be out on the picket lines. But he can’t be seen as leading the charge against the police.”