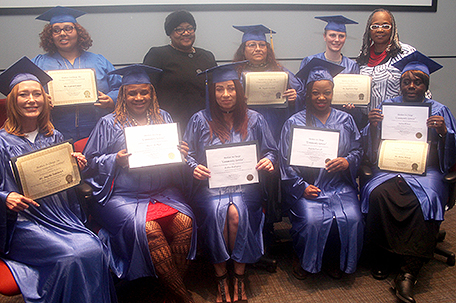 ABOVE PHOTO:  Some of the members of the  2017 graduating class of Mothers In Charge’s Women Working for a Change group.   (Photo: Robert Mendelsohn)

When Dorothy Johnson-Speight and her colleagues would visit women at the Riverside Correctional Facility that needed the assistance of her organization, “Mothers in Charge,” they noticed that there was not only a need for basic post-incarceration guidance, but also a holistic program which addressed their emotional and spiritual health as well.

Many were approaching their release date, and yet still did not possess coping skills that would help them thrive in mainstream society. Because of their convictions, many lost custody of their children and faced an extensive list of conditions needing to be met before having it reinstated — including adequate housing, employment, and ongoing counseling — which can become overwhelming to address without these skills. Others had already developed them to a certain point before landing in prison. All needed guidance.

To help address this need, Mothers in Charge developed a comprehensive job training – life skills program called Women Working for a Change. Twelve of those participants graduated from the program on Wednesday, February 15th. 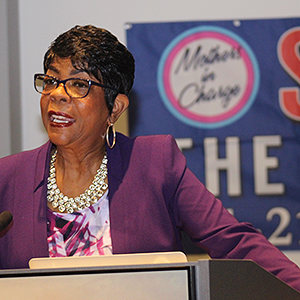 Each had completed the 10-week long course, which included resume writing, job hunting techniques, and a cognitive skills curriculum which focused on trauma issues, healthy self-esteem, and critical thinking. At the end of the process, most had obtained employment.

Mayor Kenney listened intently as each the women delivered their statements before delivering his remarks. He expressed his admiration and respect for the graduates and what they have achieved. He also emphasized the program’s essential value to Philadelphia, and his commitment to it. The mayor personally invited the three graduates that had not yet obtained employment to contact his office.

“I’ll make calls myself if I have to,” Kenney said. “you have a family with us.”

“It has been an amazing ten weeks with these women,” Dorothy Johnson-Speight told the attendees, assuring the graduates that she will continue to provide support and encouragement to them going forward. “I’m not going to let them go,” she affirmed.

All of the women in the WW4C fourth cohort have completed their community service. Each woman has obtained employment, and all have written a personal action plan. One woman has enrolled in a GED program. Six are pursuing a college education. Four have reunited with their families, and two have regained custody of their children.

Each cohort participant chooses a life affirmation that best described who they are, and what they hoped to become. Many reaffirmed a life of faith once neglected. Others celebrated clarity and a purpose for the first time in their lives. All focused on inner transformation and strength.

Cooper — who holds a bachelor’s degree in psychology — gained an understanding about herself and what has led to some of the self-sabotaging choices she has made in her life from the Trauma Workshop portion of the program.

“I had a hard time getting over my trauma,” Cooper told the audience. “That led me to be very manipulative and easily manipulated. When I got into trouble, I thought, ‘this is the end – who is going to open their doors for me now?”

Through the 10- week long program, she received an answer to that question. 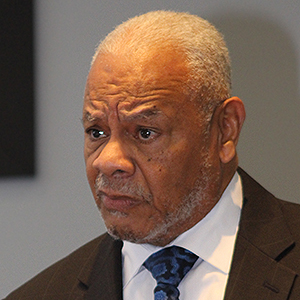 “John White, Jr. of The Consortium opened doors that gave me the opportunity to interview for [a position as] a drug and alcohol counselor. Not only was I an inmate at Riverside Correctional Facility, but I was a prisoner to my own traumatic past,” Cooper said. “Today I have high self-esteem and confidence in myself. I can excel with my Bachelor’s degree. I have nothing to hold me back, even though I am still facing charges. I’m free.”

Angelia Smithwick’s affirmation was “Today, I am the architect of my own life. I build the foundation, and I choose the contents.”

Smithwick’s downward spiral began when — after 45 years of suppressing traumatic events from her early life — the lid was blown off on December 8th, 2012.

“I was diagnosed with ovarian cancer, and then 38 days later, my son and my best friend, Cameron, was taken away from me,” she said. “That was the catalyst for my addiction…my escape from reality. I was filled with fear, anger, unforgiveness and now, a health issue. I thought that as a mother, I was supposed to protect [my children], and I had even failed to do that. So I ended up with no foundation. No one wanted to touch my grief…my trauma…”.

Participating in the program helped her make sense of it all.

“Through Mothers in Charge -Woman Working for Change, I dug down deep into my soul for the root of where all of this trouble began,” she said. “They helped me with my grief. I have a new story. Today, my scars have been turned into stars, and my pain into power. The biblical definition of restoration is to receive back more than what has been lost. Today, I am not looking for a miracle – I am the miracle.”