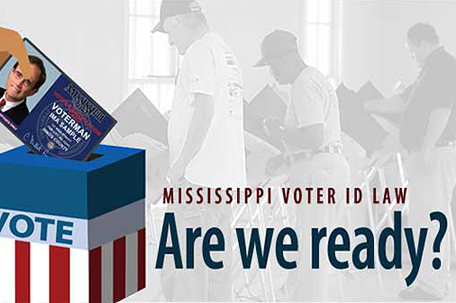 Mississippi used its new voter ID law for the first time on Tuesday, culminating a long political fight in a state with a troubled past of voting-rights suppression.

People were required to show a driver’s license or other government-issued photo identification at the polls during the Republican and Democratic primaries for U.S. House and Senate.

Secretary of State Delbert Hosemann, the state’s top elections official, said about 1,000 people who lacked an acceptable form of photo ID had received a free one from local election clerks.

“Mississippi is one big small town,” Hosemann said last week. “When we cast our ballot on Election Day, there is a high probability of knowing the poll workers in the precinct. However, voter ID is not discretionary.”

Lawmakers had squabbled about voter ID since the mid-1990s, with supporters saying it would prevent people from voting under others’ names and opponents saying there has been scant evidence of that type of fraud. Critics also said an ID requirement would disproportionately hurt minorities, the poor and older voters.

Voters approved a voter ID constitutional amendment in 2011, and legislators put the mandate into law in 2012. Until last summer, Mississippi and other states with a history of racial discrimination had to get federal approval for any changes to elections laws. A U.S. Supreme Court ruling erased that mandate and cleared the way for Mississippi to use its voter ID law, which had been awaiting Justice Department clearance.

Mississippi’s law says voters can show one of 10 types of government-issued photo identification, including a driver’s license, passport, gun license or student ID from any accredited public or private college. For the past several months, people who lack an acceptable form of ID have been able to go to an election clerk’s office to get a free, state-issued voter ID card with name, address and photo.

The law says a person without ID can vote by affidavit ballot, which would be counted if the person goes to an election clerk’s office within five days to show identification.

Mississippi NAACP president Derrick Johnson said the civil-rights group will pay attention to ensure no one is prevented from voting.

“We do understand that the state of the law has changed because of the Supreme Court decision, but the rights of voters have not changed,” Johnson said.

At A&S Fine Foods, the country-style restaurant his family owns in Union, 74-year-old Jack Nelson Jr. said precinct workers know most voters in the small town. But he said he doesn’t mind having to show ID because he thinks election officials have done a poor job of keeping voter rolls up-to-date after people die or move away. He said he believes most people have a driver’s license or other acceptable identification.

“I don’t see where that would really be a burden,” Nelson said.

Kelly Thomas moved to Mississippi from Florida, and said she was more than surprised — “shocked is more like it” — when she didn’t have to show ID to vote in the 2013 Hattiesburg mayoral race. She said she was accustomed to showing her driver’s license in Florida and had it in hand when she went to the Hattiesburg precinct.

“I asked the poll workers, ‘How do you know if I voted yet?’” said Thomas, 71. “They said, ‘Well, we check your name.’ … If someone had voted for me, how was I going to convince them that I didn’t vote yet?”