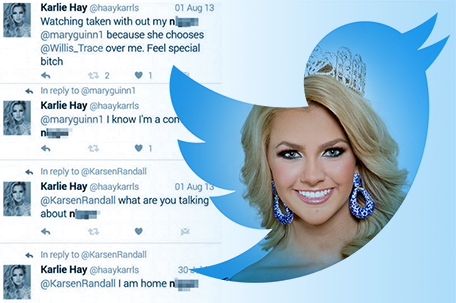 ABOVE PHOTO: Tweets pulled from Twitter of Kay’s ‘rant’ (insert).

For those optimistic Americans who believe that the younger generation is less racist than their parents, we have some bad news. The number of racist spectacles initiated by white millennials are numerous, the most recent example being Miss Teen USA’s racist rant.

Eighteen year old Karlie Hay of Texas was crowned on Saturday, and just days later, tweets from 2013 and 2014 revealed Hay used the N-word on several occasions.

Not soon after the tweets became public, many took to Twitter to call out Hay for her racially inflammatory remarks.

Hay stopped short of expressing remorse for her past language, but she did say that she’s changed.

“Through hard work, education and thanks in large part to the sisterhood that I have come to know through pageants, I am proud to say that I am today a better person,” she continued. “I am honored to hold this title and I will use this platform to promote the values of The Miss Universe Organization, and my own, that recognize the confidence, beauty and perseverance of all women.”