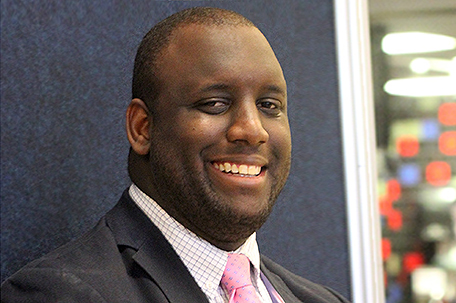 ABOVE PHOTO:  Eugene Craig, a millennial Republican, predicts, “There’s a blue wave coming and a Black wave too.” But, he said, both parties should fight for Black support.

Numbering more than 75 million, Millennials in the United States are poised to surpass Baby Boomers to become America’s largest and most powerful group, analysts and experts say.

According to William H. Frey, a senior fellow with the Metropolitan Institute, Millennials – people reaching young adulthood in the 21st century — comprise 25 percent of the total U.S. population, 30 percent of voting age Americans, and almost two-fifths of the working-age population.

Political pundits say young voters might be propelled to the polls because of their opposition to President Donald Trump. Polls show that nearly 60 percent of 18-29-year olds disapprove of Trump’s handling of his job, the highest disapproval rate of any age group. However, despite those formidable numbers, it’s still unclear how many millennials will cast ballots because polls also show that young people aren’t overly enthused in politics or either political party.

The uncertainty surrounding millennial participation in what many are calling the most consequential election in a generation is unsettling to both the Democratic and Republican parties. But Democrats stand to gain more if millennials turnout– and if turnout in general —  exceeds expectations.

Ras Plo Kwia Glebluwuo, 29, said he sees a good deal of disillusionment among his millennial peers.

“I think Millennials are just going about their lives. They’re just turned off about voting,” said Ras Plo, an educator and activist who lives in Washington, DC. “I have peers who are turned off. Those who don’t vote say the whole thing is dirty. They don’t want to legitimize the system. Generally, those who’re heavily involved are corporatists.”

Nathan Reuben, 28, said many millennials were shocked out of their apathy in the aftermath of the 2016 presidential elections, realizing that if they hoped to effect change they needed to get off the sidelines and become more involved in politics. Since then, his organization, Millennial Politics — through a website and the use of web streaming, social media, and livestreaming — is reaching a swathe of millennials.

Reuben is using his multimedia platform to activate, engage and inspire millennials to participate in this country’s democracy. In 2016, he said, about 45 percent of eligible millennial voters cast a ballot. He agreed with Glebluwuo that cynicism and disenchantment with electoral politics played a role in the outcome. This time, he said, it has to be different.

“I’m hoping for a Blue Wave. I’m cautiously optimistic,” said Reuben, who is also a Democratic strategist and political commentator. “But we need to work for it, knocking on doors, making phone calls and doing the groundwork. We (the country) need to get back to the idea of solving problems. We’ve got to vote and vote in a larger voting bloc.”

There’s a great deal at stake.

If Democrats win one or both chambers, life for President Donald Trump may become more complicated. There will be greater oversight, hearings and investigations into controversial actions Trump has taken since Republicans in Congress have not used their ability to serve as a check and balance to the executive branch.

The Republican-led Congress has been implementing a domestic agenda that includes more than 60 attempts to repeal the Affordable Care Act without being able to arrive at a viable alternative; refusing to grant any type of relief to young people overburdened with a staggering student loan debt of $1.5 trillion; and saddling future generations with a tax heist dressed up like tax reform, which – over the course of a decade – will transfer an estimated $5.7 trillion from the middle class to the extremely wealthy.

Millennials are also turned off by the hyper-partisan and toxic political environment and a president whose rhetoric is believed by many critics to have led to violence against racial minorities. Those incidents included those just last week when a Trump supporter was arrested and charged with mailing 11 pipe bombs to some of Trump’s most vocal critics; a White nationalist shot and killed two elderly African-Americans in Louisville, Kentucky; and a man spewing anti-Semitic comments shot and killed 11 worshipers at a Jewish synagogue in Pittsburgh.

Eugene Craig, a millennial conservative Republican, businessman and former vice chair of the Maryland Republican Party, echoed the sentiments of many about the importance of the millennials’ role in the mid-term elections.

“This election is absolutely important and will set the tone for the next decade. Those who emerge to hold power will decide redistricting, city and county councils, state and local governments,” said Craig, a Baltimore resident and Managing Partner at X- Factor Strategies LLC. “Millennials will be the most consequential for this and next two or three elections. Millennials represent the largest constituency, larger than Baby Boomers. There is a Blue Wave happening and a Black wave as well. Millennials are trying to send a message to Trump, a few messages.”

Craig said both parties have done a disservice to Black people with each acting as if Black people need to come to them, as opposed to politicos showing in word and deed what they have to offer and giving African-Americans a viable choice.

“I put it on party to make people fight for our support, give Black people a reason to support them,” Craig said.

Baltimore resident and political organizer, Dayvon Love, said the political environment is forcing millennials to reassess their relationships and alliances.

“We’re in an interesting moment where Donald Trump being president is forcing a conversation between Black and White millennials,” said Love, director of Public Policy for Leaders of a Beautiful Struggle, which is a grassroots think tank that advances the public policy interests of Black people. “Trump’s election has impacted relations. Blacks are angling to be more engaged…An important question is to what extent are Millennials going to stay engaged?”

Love has been a vocal advocate and organizer since 2010, including successfully standing up to the bail bonds industry in the fight for bail reform and leading efforts to pressure Maryland state officials to abandon plans to build a juvenile jail in East Baltimore for youth charged with adult crimes.

It’s important for Black people to use all vehicles available to them to devise and implement programs and build capacity as they create and sustain institutions, Love says. “I don’t believe in legitimizing the current system or seeing it as a panacea. But there are things we can do like accepting public dollars, changing how law enforcement operates in our community and restructuring education to make it responsive to community needs,” he said. “This requires some involvement in the political realm.”