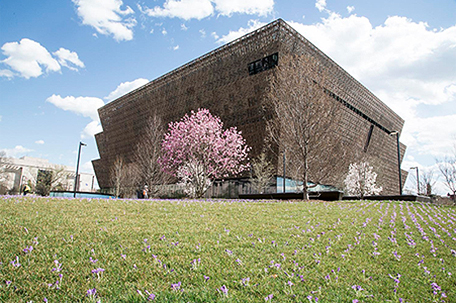 It was a long time coming, over 100 years in the making, much of its history even older than that. But it is finally a reality.

The National Museum of African American History and Culture opened its doors to the public on Saturday, September 24. Old and young alike of all races, ethnicities, and nationalities came together to celebrate the history, legacy, and contributions of a people whose story began on the continent of Africa thousands of years ago, and whose descendants are a part of the American story.

Before the museum’s official opening, Rep. John Lewis (D- GA) who as a young man helped spearhead the Student Nonviolent Coordinating Committee (SNCC)—like many of his surviving contemporaries, was overcome with emotion, the memory of his predecessors only a thought away.

“The museum [NMAAHC] is one of the most moving institutions. It is a beautiful building. And there is so much history in it. I’ve been there; I’ve walked through it. When the President cuts the ribbon on Saturday, I do not know what I’m going to do. You need to spend some time there. I’m going to take my time. It tells our story – the whole story—from the days of slavery to the present,” he said, his voice shaking with emotion.

Lewis did indeed shed a few tears he delivered his remarks on the “front porch” side of the museum, embracing President Obama when the ceremony ended. The irony and wonder of the nation’s first African American president and his wife, accompanied by four generations of a family descended from an enslaved man —was not lost on anyone present.

The museum holds a special significance for those like Lewis, whose relatives, friends, mentors and contemporaries—an at times, themselves–are featured throughout the exhibits in the NMAAHC. 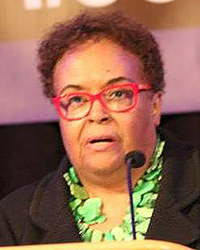 Rep. Lewis’ SNCC “sister,” Dr. Joyce Ladner, esteemed sociologist, educator and former president of Howard University, was spirited back to those past struggles of the 1960s in which she and so many others participated in as young people from Mississippi like herself and beyond.

She thought of people like her late parents and her great Uncle Archie who fought in World War I, who cheered wildly the time Jackie Robinson came to bat for the Brooklyn Dodgers. “We kids jumped up and down with him, and each time he told my sister Dorie and me that we had to be the ‘Jackie Robinsons’ of our generation,” Dr. Ladner recalled.

She and her sister went on to fight alongside the iconic greats of the 20th century Civil Rights Movement.

“I never thought of them as esteemed company, because we were living in the moment, day to day in the thick of the battle,” said Dr. Ladner. “I looked up to Mrs. Hamer, Mrs. Baker and the other adults as wise and courageous people who were putting their lives on the line. And yet, they were quite ordinary people. Everyone I met in the movement was quite ordinary, but doing extraordinary things.”

Educational consultant and historian Gene Alexander Peters is the founder of SANKOFA Exhibit Consultants, who provide cultural and exhibition consulting services relating to the diasporic African American Slavery experience. Peters was very impressed with the museum during his first visit this week.

“I was honored to see many of my mentors and contemporaries mentioned in the exhibits. But I was also happy to see many others who are often not included,” Peters said.

Through SANKOFA Exhibit Consultants (slavehistory.org), he has spent almost twenty years specializing in bringing a tactile slavery experience to thousands through its relics and stories. The Slave Relics Historical Museum (slaverelics.org), for whom Peters is a consultant, contributed at least 5 or 6 items to the NMAAHC.

Arthur McFarlane III, great grandson of W.E.B. DuBois, one of many iconic figures featured in the museum, does not have many solid memories of his famous relative.

“I have pictures with him going back to within a couple of months of my birth. I really learned about him through books, much like many others did. Things always had a little different spin for me in terms of him, though – as I’m sure you can imagine.”

Performing arts veteran Benjamin Prestbury is a virtual griot who cut his teeth at the feet of Harlem Renaissance mentors like Langston Hughes and Count Basie. He has always been a “race man” – a title which predates its contemporary equivalent, “unapologetically Black.” Although he has not seen the museum yet, he is glad it exists.

“It is great to light the sites and tell the story of the greats, and the least of the great, who made this country great. Names like John Hanson, Clementine Hunter, and many others can and should be, and I hope are noted,” Prestbury noted.

During her visit, Dr. Ladner found herself pressed into the role of tour guide for the exhibits that included so many of the people and places she knew encountered as a young civil rights movement – including the casket of Emmitt Till. His lynching became the first volley in the fight for justice that Civil Right Movement addressed in the 50s and 60s.

“The murder of Medgar Evers represented one of the darkest periods of my young life,” she continued. “The photo of him — looking so serene and optimistic as he was in real life — was captured in his and Myrlie’s wedding picture, showing us that the assassinated Medgar was a most ordinary man who married and had a family who loved him just like the white folks loved theirs. I met Medgar when I was a young girl, and he was one of my mentors, so I took his murder real hard and real personal.”

As she made her way through the museum, memories of people in her life –present and absent–walked with her. 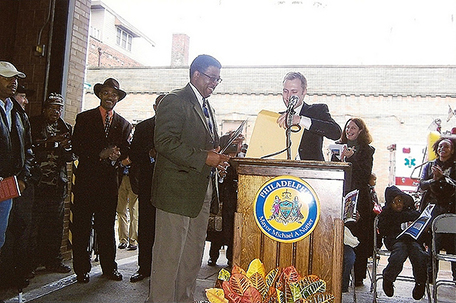 “I felt like I was walking through my own life, the high points of my late teens and twenties when I met and worked with so many young people who were also the avengers of Emmett Till. Stokely Carmichael and too many others to name, ” Ladner said. “Bayard Rustin, Medgar, MLK, my professor John Salter, my roommate Joan Trumpauer, and Anne Moody– featured in the iconic sit in the photograph taken at Woolworth’s in Jackson, MS where they were mobbed. I am so glad I was not an observer of those tough times but a participant observer – that I was an eyewitness to history being made, even though I didn’t think of it that way at that time.”

Taking into consideration the size of the museum and its over 30,000 exhibits, Gene Alexander Peters realizes that he has only seen a fraction of the material available. He is looking forward to seeing more of the “more horrific and cruel” artifacts like nooses and spikes— also part of African American history, painful and brutal as it is– included in the NMAAHC collections as time goes on.

Arthur McFarlane III is excited about the new institution.

“I think the completion of the NMAAHC is an incredible historical moment,” McFarlane said. “We have come to a point where much of the story can be told, instead of slinking around in the shadows. The conversations are being held at a national and international level, instead of in a small backroom. We are able to describe the horrors of slavery alongside the strength and resilience of an unstoppable people.”

Benjamin Prestbury is concerned about the fact that African Americans don’t actually own the museum itself.

“My major issue with this giant of a story teller is that since we don’t own it, we will never be able to control it,” he explained.”It is our history placed in the hands of descendants of many who oppressively created much of that which is being shared.”

Everyone has high hopes for the NMAAHC, hoping that it increases interest in learning more about not only what is on exhibit in the museum, but everywhere that African Americans have played a significant part in this country. This includes including physical locations in communities that have been long forgotten, victims of apathy, gentrification, and eminent domain.

Benjamin Prestbury has been trying almost single-handedly to save the Baltimore Black Musicians Union Hall on Dolphin Street, restoring it to hopefully serve as both a museum and hub of arts education and performance for years to come. Despite embracing modern technology and communication methods, like using social media and spearheading a GoFund Me crowdfunding account months ago to raise funds for the restoration, he has had little to no response. He– like many others who came of age during the Great Depression and Jim Crow era–are watching living museums in the form of cultural landmarks disappearing one by one. Prestbury—an active octogenarian—is still accepting donations at gofundme.com/Union-Hall, but he is growing weary and frustrated.

“I weep inside at how rapidly we let it [African American cultural history] die and/or become controlled by those who distort and/or demolish it,” Prestbury remarked. “The “Chitlin Circuit” along the East Coast was made up of the Howard Theater in Washington, The Royal Theater here in Baltimore, The Uptown Theater in Philadelphia and the Apollo Theater in New York. It gave our musical talent an opportunity to come in off the road for a week of work. Two of those spots have been demolished while the other two have been lost to our control. The Renaissance Ballroom — as many remember as being the home of the Harlem Rens, and a meeting place for Langston Hughes and Zora Neale Hurston, has lost its place in the African American history books.”

Gene Alexander Peters, who as a historian is equally concerned about the rapidly vanishing landmarks in African-American communities, hopes that people will recognize what a significant role the NMAAHC plays in society. He hopes that people will continue to advocate for it, and the history contained within — and everywhere African Americans have made their mark in this country.

“I hope that the museum will create more awareness, enlightenment, interest and knowledge     [about African American history],” Peters said.

“We can begin to tell the whole story instead of the bits and pieces that are revealed by those who would sanitize and re-write our deep pain AND our enormous contributions,” observed Arthur McFarlane. “I’m proud to be living in these times, and I look forward to spending time exploring the museum. I wish I could have been there for the opening.”

For Dr. Ladner, the symbol of hope embodied in this institution is the one that she hopes inspires generations to come.

“The museum offers a new lease on a fragile lifeline so many Black people are experiencing. I wish gang members and so many other young black people who have given up can go to the museum and find hope,” she reflected.

Arthur McFarlane III wants people to absorb and reflect upon the important legacy that his great-grandfather left.

“I hope they learn the things my great-grandfather spent his life trying to teach – all of us,” McFarlane said If you look back to the materials he took to Paris in 1900, you will see a people who owned land, were mayors and farmers, created colleges and academic disciplines, who worked hard and loved the life they lived and were creating, who helped make America everything she is today. I hope people will be proud of their heritage, and the amazing courage that has made a bright future possible.”

50 years later, focus on jobs minimized in memories of March on Washington