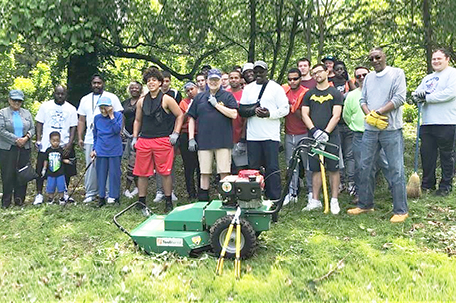 ABOVE PHOTO: Some of the constituents of State Rep. Dan Williams (D-74th Dist.) who helped clean up the Old Evergreen Cemetery in Coatesville just in time for Memorial Day. (Photo/pahouse.com)

On May 26, the recorder of deeds and Veteran Affairs departments, along with the Chester County Commissioners, organized a flag placement event for the fallen heroes buried at Old Evergreen Cemetery in Coatesville in observance of Memorial Day 2021.

The Old Evergreen Cemetery was originally constructed during a time when segregation was still prominent in the United States and thus contains gravesites solely of African Americans, many of whom belonged to the Hayti community of Valley Township (Coatesville). It was filled to capacity in the 1960s prior to the founding of the New Evergreen Cemetery adjacent extension.

Ownership of the cemetery has remained ambiguous over decades and thus it has been abandoned and unattended, except by a single family who has descendants interred there and they volunteer their time to care for the grounds.

An introduction and welcome by Recorder of Deeds Chris Pielli was followed by the Presentation of Colors by the Coatesville Area High School AFJROTC PA-771 Cadets and an a capella rendition of the National Anthem by professional vocalist & Chester County Recorder of Deeds’ Special Projects Coordinator Kim Bydlon.

There was then a wreath-laying ceremony by Chester County Prothonotary Debbie Bookman and family member(s) of interred veterans followed by a performance of Taps by Coatesville V.F.W. Post 287 Chaplain Bob McGonigle.

Short speeches from county and state-elected officials preceded the placing of flags and markers on roughly 40 veteran gravesites by participants.