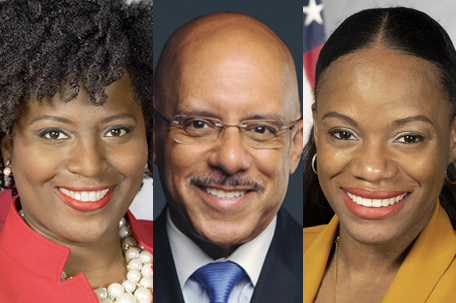 On the heels of the U.S. House passing the CROWN Act, State Reps. Joanna McClinton (D-191st Dist.) and Summer Lee(D-34th Dist.), along with State Sen. Vincent Hughes are renewing their fight to enact similar legislation to outlaw discrimination based on hairstyles in Pennsylvania.

During a recent virtual news conference, McClinton, Lee and Hughes joined ABA Consulting Founder and CEO Adjoa B. Asamoah to highlight bills they’ve introduced (H.B. 2725 and S.B. 964) to amend the Pennsylvania Human Relations Act and clarify the term “race” to include traits such as hair texture and protective hairstyles.

“This is just another way Black and brown people are being victimized for embracing their ethnic roots and going against what society has deemed normal,” House Democratic Caucus Chair McClinton said. “Braids and afros should never rob someone of well-deserving opportunities. However, we’ve seen it happen to too many of our brothers and sisters in the workplace, sports and school, including at a Texas high school, where a senior was required to cut his dreadlocks to walk at graduation. I refuse to sit back and let this form of racism stand in Pennsylvania.”

“For far too long, Black women have been penalized for simply existing as themselves. True social justice isn’t just about badly needed police reforms, it’s about confronting systemic racism across our society,” Lee said. “Passing this legislation is long overdue and would be an important step toward confronting and stopping racial discrimination.”

“I am proud to support this initiative and the push to ban discrimination based on a person’s hair in Pennsylvania and across the U.S.,” Hughes (D-7th Dist.) said. “Natural hair is beautiful and should be treated as such, regardless of a person’s race. We must end the discrimination that Black and Brown people have experienced because of the choice to wear natural hair styles in the workplace, at schools and in other public spaces.”

If passed and signed into law, the Commonwealth would join a number of other states, including California, New Jersey and New York, in enacting the CROWN Act, which stands for Creating a Respectful and Open World for Natural Hair.

H.B. 2725 is currently in the House State Government Committee, while S.B. 964 is in the Senate Labor and Industry Committee.

The federal bill passed the House last Monday and awaits a vote in the Senate.

McClinton, Kinsey to introduce legislation to increase opportunities for pardons in Pennsylvania