McClinton, Kinsey to introduce legislation to increase opportunities for pardons in Pennsylvania 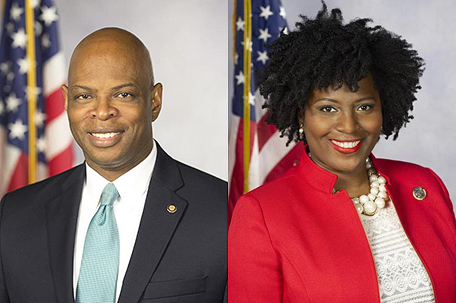 House Bill 2262 would do away with the requirement for a unanimous vote by the state Board of Pardons, and instead, replace it with a required simple majority vote. This vote is needed in order to recommend a pardon or commutation of a sentence to the governor for final approval.

“Criminal justice reform is front and center on the minds of legislators in Harrisburg and people all across the commonwealth,” McClinton said. “One way we can truly seek reform is to offer hope to persons who have served decades in prison and no longer pose a threat to their communities. By lowering the threshold to a three-fifths vote of the pardons board to recommend pardon or commutation to the governor, Pennsylvania can show that it is truly leading by example when it comes to reforming our criminal justice system.”

“In 1995, the Pennsylvania Constitution was amended to require a unanimous vote by the pardons board. I believe we’ve come a long way in understanding that we must do more in order to provide true opportunities for rehabilitated offenders to be pardoned or have their sentences commuted,” Kinsey said. “Ultimately, the final decision will still lay with the governor.”

McClinton and Kinsey worked closely with Attorney Gen.l Josh Shapiro to craft the bill. The bill also has the support of Families Against Mandatory Minimums, the ACLU, and the Prison Policy Initiative.

“The criminal justice system needs reform, and Pennsylvania’s Board of Pardons is no different. I support Representatives McClinton and Kinsey’s legislation to change Pennsylvania’s Board of Pardons’ approvals for life sentences from a unanimous vote to a simple 3-2 majority,” Shapiro said. “Though there is existing legislation to change the threshold to 4-1 majority votes, this doesn’t address the issues the board has before it. Only one applicant in the past three years has been denied commutation by a sole no vote — we must go further. Representatives McClinton and Kinsey’s legislation will address the true reforms needed and help send more commutations to the governor’s desk for his approval.”

“For more than 5,400 people serving mandatory life without parole sentences in Pennsylvania, commutation is their only hope for relief. Many have long-since rehabilitated and are aging or ill, and our communities would be much better served supporting second chances and mercy over endless incapacitation,” added K. Celeste Trusty, PA State Director of Families Against Mandatory Minimums. “Returning the Board of Pardons to a 3-2 vote requirement will allow many more deserving people to return home to their communities and loved ones and reduce the financial burden of mass incarceration on Pennsylvania’s taxpayers.”

McClinton and Kinsey are hopeful that this legislation will increase the number of pardon and commutation recommendations that the governor considers each year. House Bill 2262 is an amendment to the Pennsylvania Constitution and as such will require passage in two consecutive legislative sessions and then must be approved by voters in the state.

Rabb, Howard introduce legislation that would ban carrying a firearm while intoxicated