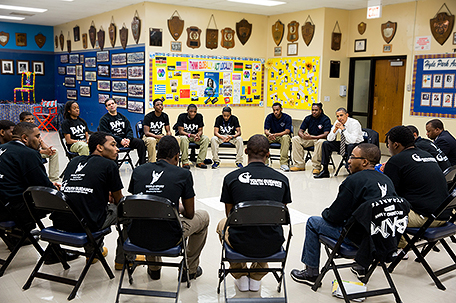 So far 11 nonprofit organizations whose mission is to help at-risk youth stay out of trouble especially during the summer have received millions of dollars raised by private donors at the urging of Mayor Rahm Emanuel.

According to the fundraising committee chaired by James Reynolds, CEO of Loop Capital Markets and Tom Wilson, CEO of Allstate Insurance, $42 million has been raised and $1.7 million will be split this summer by those organizations.

Becoming A Man (BAM) program is a male mentoring program run by the Youth Guidance organization. The success of the program, which is available in 18 public schools, has captured the interest of President Barack Obama. In February, the president spoke to students at Hyde Park Career Academy High School, which included a private meeting with BAM members.

Earlier this month the president had lunch with BAM members from Hyde Park and their fathers at the White House to celebrate Father’s Day. “We didn’t get to sit at his desk, but the president showed us a bunch of different things and we got to take a picture with him in the Oval Office,” said Robert Scates, a BAM member and senior at Hyde Park High School. “He hung out for a bit. He said he was proud of us for graduating. He told us to keep in touch.”

Seeing young, Black males graduate from high school, go to college and pursue a career is encouraging, explained Reynolds. “I’m proud of the work we’re doing to change the lives of at-risk youth in our city. I’m especially excited to see the plan in motion, getting money out to deserving programs this summer, and can’t wait to see the results of our investment in these kids and their future,” Reynolds said.

Giving his time and resources to help youth is nothing new for Reynolds. In 2011, as chairman of the Chicago Housing Authority, Reynolds donated his annual $100,000 stipend to a nonprofit. So instead of receiving his stipend until his current term expires in 2016, Reynolds said he will donate the money to Windows of Opportunity to fund college scholarships for students living in public housing.

“I grew up in subsidized housing so I know what it is like to struggle. I have not always been well off but now that I am I see it as my responsibility to reach back and help others,” Reynolds added. “This money ($100,000 CHA stipend) could be better served helping young people go to college.”

The monies from the $42 million will be used to provide job training, conflict resolution, and mentoring this summer to more than 3,000 youth living in 23 neighborhoods on the south and west sides. Officials at one organization, Youth Outreach Services, said they plan to provide 160 youth from the juvenile justice system with internships that will pair them up with a mentor and offer them “job training and readiness skills” as well as financial literacy training.

And all recipients have a proven track record of helping at-risk youth, said Reynolds, which is why they were chosen out of nearly 60 applications.

The selection was based on a comprehensive set of criteria focused heavily on research that shows that programs with a social-emotional learning component have the potential to reduce violence by more than 40 percent, according to Reynolds.

Another round of competition is expected later this year.