Marchers across US call on Congress to bolster voting rights 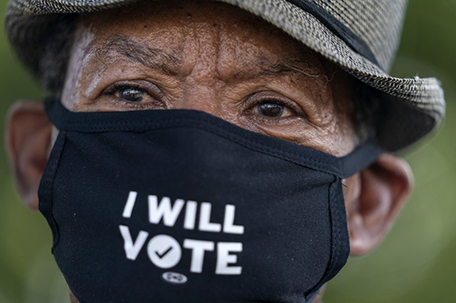 WASHINGTON (AP) — Thousands of voting rights advocates rallied across the country Saturday to call for sweeping federal laws that would wipe out voting restrictions advancing in some Republican-controlled states that could make it harder to cast a ballot.

Many activists view the fight over voting rules as the civil rights issue of the era. But frustrations have mounted for months because two expansive election bills have stalled in the U.S. Senate, which is split evenly between Democrats and Republicans and the measures lack the votes to overcome a GOP blockade.

The rallies, which were held in dozens of cities, were intended to increase pressure on Democrats to rewrite procedural rules that would allow Democrats to muscle the legislation through without Republican votes. But they were also aimed at coaxing President Joe Biden to become a more forceful advocate on the issue.ADVERTISEMENT

“You said the night you won that Black America had your back, and that you were going to have Black Americans’ backs,” the Rev. Al Sharpton, who helped organize the national demonstrations, said at a rally in Washington. “Well, Mr. President, they’re stabbing us in the back.”

More than a thousand people turned out in sweltering heat on the National Mall on Saturday, the 58th anniversary of Martin Luther King Jr.’s “I Have a Dream” speech.

His son Martin Luther King III used the occasion to call on the Senate to scrap the filibuster rule, which requires 60 votes for most legislation, including the voting bills, to advance.

“Our country is backsliding to the unconscionable days of Jim Crow. And some of our senators are saying, ‘Well, we can’t overcome the filibuster,’” King told the crowd. “I say to you today: Get rid of the filibuster. That is a monument to white supremacy we must tear down.”

At one point, nearly a dozen state lawmakers from Texas who had sought to block changes to their state’s elections laws, strolled onto the stage at the National Mall and were hailed as patriots.

“Texas is the worst state to vote in, in the entire nation,” said U.S. Rep. Sheila Jackson Lee, a Democrat from Houston.

Even as rally participants pushed for stronger protections, Republican lawmakers in Texas were on the brink of passing an overhaul of its voting laws, including restrictions on voting by mail, limits on when voters can cast ballots and other measures that Republicans say would improve the integrity of its elections.

Texas would be the latest state to pass new laws, following moves in other Republican-controlled states like Arizona, Florida and Georgia to put in place similar restrictions — efforts driven by former President Donald Trump’s false claims that the 2020 election was stolen.ADVERTISEMENT

Congressional Democrats have responded to the Republican efforts to make it harder to vote by approving legislation earlier this week that would restore sections of the landmark Voting Rights Act of 1965. The bill would require the Justice Department to once again police changes to voting laws in states with a history of restricting the vote, a practice that was put on hold by the Supreme Court in 2013.

But unless Democrats make changes to the Senate procedural rules, passage of the bill, as well as a separate measure that would establish national election standards, remains unlikely.

In a video posted on Twitter earlier in the day, Vice President Kamala Harris urged Congress to pass legislation that she said was needed to push back against Republicans in Texas, Florida and other states.

“The country is changing. The demographics are changing. And (Republicans) think that if they don’t get ahead of it and suppress the vote, they ain’t gonna have a say in it,” said Ken Jones, 72, of Atlanta, who traveled to Washington with his wife, Paula, to attend the rally.

Angela Hill, 61, who lives in the Washington area, attended the rally with her daughter because she is “alarmed” by Republican efforts to make it harder to vote. In spite of Trump’s false claims of a stolen victory, Republican and Democratic election officials across the country certified the outcome and Trump’s own attorney general said he saw no evidence of widespread voter fraud.

“Why was it necessary for Republican states to try and make it more difficult to vote? Things went well in this election,” Hill said.

Marches were also scheduled for Atlanta, Miami, Phoenix and other cities under the banner of “March On for Voting Rights,” organized by Sharpton and King. Because of concerns over the fast-spreading delta variant of COVID-19, a march in Houston did not go on as planned.

A daughter of the late civil rights leader, Bernice King, led the march in Atlanta. In an interview with The Associated Press, she called for “new levels of civil disobedience” to push against voting restrictions.

“We’re going to have to disrupt some things. We’ve got to disturb this country to the point that people who are still uninvolved and on the periphery to get involved in some fashion,” she said.

In Phoenix, the Rev. Terry Mackey, the pastor of Pilgrim Rest Baptist Church, urged those attending an indoor rally to honor those who fought and shed blood for voting rights.

“I want you to stand up and fight,” he said, “until every person in this state has the same voting rights as anybody else.”