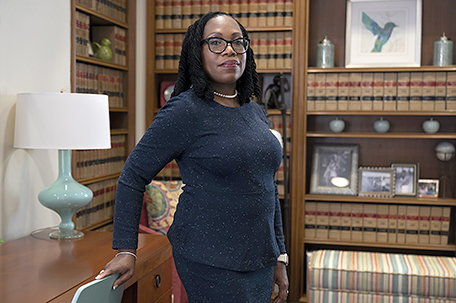 PHILADELPHIA, PA— The PowerUp Foundation, PA Democratic Black Caucus, WIN With Black Women, and a Coalition of other Women’s organizations, from across Pennsylvania, have come together to host a rally to show support for the confirmation of U.S. Supreme Court nominee Judge Ketanji Brown Jackson. The theme for the event is KBJ—The Justice for All. The event will take place, Saturday, March 26, 2022, starting at 11:00 a.m., outside across from Philadelphia City Hall, at Dillworth Park, on 1, South 15th Street, on the west side of City Hall.

One of the lead organizers for the event, Linda Fields, a member of the Democratic National Committee, (DNC), and a longtime member of the Democratic Party in Norristown stated, “We were confident that President Biden would keep the commitment he made during his campaign for President and he has nominated a Black woman, the Honorable Ketanji Brown Jackson for the Supreme Court. She is qualified, prepared, and ready to make history, and become America’s first African American woman Supreme Court Justice, once confirmed by the U.S. Senate. Our hope is that the confirmation process is fair and swift because she’s needed on our nation’s highest court as soon as possible.”

Linda Fields says that organizers of the March 26th event, expect to have some 1,000 women on hand, to participate in the rally.
Philadelphia City Councilwoman Cindy Bass commented, “”President Biden’s nomination of Judge Ketanji Brown Jackson is not only historic, it is long overdue. The nation’s highest court should represent the diversity of America, and this nomination finally fills that gap. This judge is supremely qualified. Therefore, there should be no question about her fitness to serve as a Supreme Court Justice, and I urge members of the Senate to swiftly confirm Judge Ketanji Brown Jackson as the first Black woman to the Supreme Court.”

A list of phenomenal speakers will address rally participants. This is an event you do not want to miss.

Ketanji Brown Jackson was born September 14, 1970, and she is an attorney and jurist serving as a federal judge on the United States Court of Appeals for the District of Columbia Circuit since 2021. Born in Washington, D.C., and raised in Miami, Florida, Jackson attended Harvard University for college and law school, where she served as an editor on the Harvard Law Review. She began her legal career with three clerkships, including one with U.S. Supreme Court Associate Justice Stephen Breyer. Prior to her elevation to an appellate court, from 2013 to 2021, she served as a district judge for the United States District Court for the District of Columbia. Jackson was also vice chair of the United States Sentencing Commission from 2010 to 2014. Since 2016, she has been a member of the Harvard Board of Overseers.

On February 25, 2022, President Joe Biden announced that Jackson was his nominee for Associate Justice of the Supreme Court of the United States, filling the vacancy created upon Breyer’s retirement. If confirmed, Jackson would be the first black woman to sit on the Supreme Court.
The support rally for Judge Ketanji Brown Jackson is a rain or shine event.

All smiles, Jackson tries for Senate reset on Supreme Court