Many view ‘Black friend defense’ as a tired, hollow argument 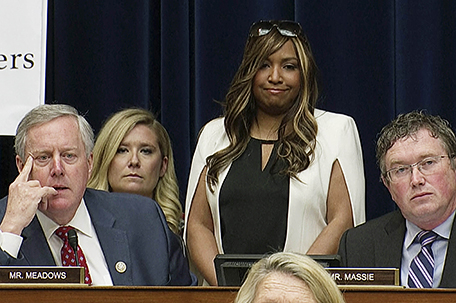 ABOVE PHOTO: Rep. Mark Meadows (R-N.C.) listens as he questions Michael Cohen, President Donald Trump’s former lawyer, as Cohen testifies before the House Oversight and Reform Committee on Capitol Hill in Washington. Lynne Patton, who works in the Trump administration at the Department of Housing and Urban Development, stands behind Meadows, as Meadows said to Cohen, “I asked Lynne to come today in her personal capacity to actually shed some light.” (AP Photo)

By Terry Tang and Deepti Hajela

Kelly Darden Jr. still remembers one of the first times he experienced the “Black friend defense.”

Back in high school, a group of white classmates dressed in Confederate-inspired clothing as part of a social club called the “Rebel Rousers” and insisted they weren’t racist when confronted because some of them knew Darden, who is Black.

“It was insulting,” the 64-year-old Greenville, North Carolina, man recalled Thursday. “I was insulted by it even when it was occurring.”

Darden and countless other African-Americans have experienced variations of the “Black friend defense” — saying that a person can’t be racist because of the color of the company he keeps — for generations. And the trope played out in front of a national TV audience this week as Republican Rep. Mark Meadows defended President Donald Trump against testimony by Trump’s former lawyer, Michael Cohen , who claimed the president is racist. Meadows, of North Carolina, quickly sent social media into a frenzy when he pointed to Lynne Patton, a black Trump administration staffer, and said Patton never would tolerate working for a racist .

Many consider the “Black friend defense” a tired and hollow argument.

“The fact someone would actually use a prop, a Black woman in this chamber, in this committee, is alone racist in itself,” Democratic Rep. Rashida Tlaib of Michigan said in response to Meadows’ interaction with Patton, who works at the Department of Housing and Urban Development.

An outraged Meadows, who is White, hit back, saying he can’t be racist because he has nieces and nephews of color and he is friends with Rep. Elijah Cummings, who is Black and was chairing the hearing.

The “defense” has a history of being part of a politician’s playbook.

Trump himself has trotted it out more than once. While giving remarks during a 2016 presidential campaign stop, Trump pointed to someone in the crowd and yelled “Look at my African-American over there.”

A few Black celebrities have been called props or “Uncle Toms” for throwing support Trump’s way or simply just meeting with him. Kanye West, Steve Harvey and Jim Brown have all been criticized.

Harvey, who voted for Hillary Clinton, told media outlets in 2017 that he regretted meeting with the president at Trump Tower because of the backlash. He only did so in the hopes of helping with Trump’s transition to the White House.

In “4 Little Girls,” Spike Lee’s 1997 documentary revisiting the deadly 1963 Birmingham church bombing, former Alabama governor and onetime staunch segregationist George Wallace talks about how he has helped Black people. At one point, he is seen sitting behind the governor’s desk and summons a Black man.

“Here’s one of my best friends right here … my best friend right here. I wouldn’t go anywhere without him,” Wallace says while holding the man’s hand. The man stands quietly but doesn’t say anything.

The phenomenon was the subject of a 2014 study done by University of London Business School professor Daniel A. Effron.

In his research, Effron noted that former Bosnian leader Radovan Karadzic said he held no anti-Muslim prejudice because his former barber was Muslim. In 2016, Karadzic was convicted of genocide, war crimes, and crimes against humanity for wartime atrocities including the 1995 massacre of 8,000 Muslim men.

Tyler Parry, an associate professor of African American Studies at California State University in Fullerton, said using Black people as political props is something that occurred as far back as the 19th century in debates about slavery. In Antebellum-era writings by former slave owners, they would often describe their relationship with slaves as a friendship. It was a way for them to justify their stance on slavery.

Parry said he finds it remarkable that people in the public eye keep using “the Black friend” excuse over and over in almost verbatim language rather than issue a mea culpa. It comes off shallow and brings the authenticity of the friendship into question, he said.

“There’s a few studies that say it’s a way to overcompensate — particularly a White person or a person of privilege feels the need to accumulate friends of color in case they are ever accused of racism,” Parry said. “If they can deflect the criticism and place it upon their friend as a way to explain it, they can get off the hook.”

Patton, the Trump administration staffer, denied she was a figurehead being exploited by Republicans. A former event planner best known for her work on the wedding of Trump’s son Eric, Patton slammed Democratic lawmakers who “placed more credence on the word of a self-confessed convicted perjurer” than a highly educated Black woman working alongside the president.

“That is not the resume of a prop. It is however, the resume of someone who remains completely unfazed by the criticism of others and laser focused,” Patton wrote on Instagram.