Many Pennsylvanians who are currently or were incarcerated can vote, according to advocates, leaders 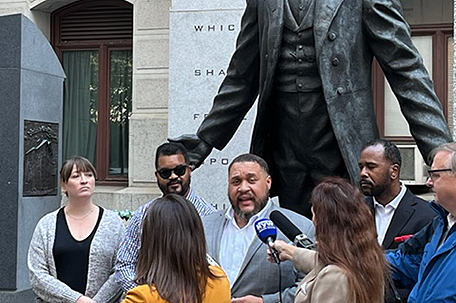 Advocates, community leaders and formerly incarcerated Pennsylvanians held a press conference at the memorial of civil rights champion Octavius V. Catto on October 11 to call attention to the voting rights of thousands of Pennsylvanians currently held in local jails and others who have already served their sentences for past felony convictions.

“There are thousands of Pennsylvanians with criminal convictions or awaiting trial behind bars who need to know that they’re eligible to register and vote,” said Leigh Owens, founder and executive director of PENNFranchise. “This is about including everyone in the democratic process and building power in disenfranchised communities.”

A 2021 report issued by All Voting is Local, the Committee of Seventy and Common Cause PA found that only 52 people had requested mail-in ballots in the 2020 general election using an address associated with one of 18 county jails. At the time, nearly 23,000 people were held in jails across the 67 counties.

The same report also found that voting policies in county jails varied widely in detail, with only seven maintaining a written program outlining key dates, documents, and procedural steps to ensure that inmates could register to vote and request mail-in ballots.

Another 13 counties had brief or vague policies on file, while 26 had no written policies at all.

In addition to the challenge of ensuring access to the ballot in jail facilities, misunderstandings around voting rights for individuals with criminal convictions in Pennsylvania remain pervasive.

Only individuals serving a felony sentence and who will not be released from confinement before the date of the next election are prohibited from voting (as well as persons convicted of violating election law within the last four years).

All other individuals — including those awaiting trial, on probation or parole, under house arrest, or confined due to a misdemeanor (and not a felony) — are eligible to register and vote.