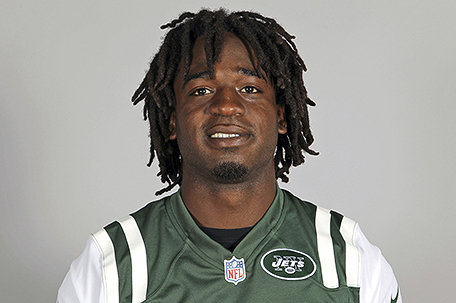 ABOVE PHOTO:  This is a 2013 file photo showing New York Jets running back Joe McKnight. Former NFL player McKnight has been shot to death following an argument at an intersection with another motorist. Jefferson Parish (La.) Sheriff Newell Normand says it happened about 2:43 p.m. Thursday, Dec. 1, 2016, in Terrytown, a suburb of New Orleans. (AP Photo/File)

By Rebecca Santana and Bill Fuller

HARVEY, La.  — The man who fatally shot ex-NFL player Joe McKnight during a road rage dispute has been arrested and jailed on a manslaughter charge, records show.

Ronald Gasser, 54, was arrested late Monday. He was initially taken into custody after the shooting last Thursday, but he was released without being charged pending further investigation.

It’s not clear whether Gasser has an attorney. Attempts to reach his mother, grandmother and stepsister were unsuccessful.

Jefferson Parish Sheriff Newell Normand announced a news conference for 10 a.m. Tuesday to discuss the case. Normand has said the dispute between the men started on a bridge and proceeded into a New Orleans suburb.

Gasser shot McKnight three times from inside his car while McKnight stood outside, Normand said. No weapon was found on or near McKnight’s body, authorities said.

When deputies arrived, the sheriff said Gasser handed them his gun and said he shot McKnight, 28.

McKnight is Black and Gasser is White, authorities said. Normand said race hasn’t played a role in the case.

McKnight played three seasons for the New York Jets and one with the Kansas City Chiefs.

The Jets held a moment of silence Monday night before their game against the Indianapolis Colts at MetLife Stadium to honor the former running back.

McKnight was rated the nation’s No. 1 running back recruit when he signed with the University of Southern California. He was a fourth-round draft pick of the Jets in 2010 and played three seasons for New York. McKnight had a 107-yard kickoff return for a touchdown in 2011, and it remains the longest play in Jets history.

He also spent a season with Kansas City, and most recently played for the Saskatchewan Roughriders of the Canadian Football League.

McKnight’s death was eerily similar to that of former New Orleans Saints player Will Smith, who was killed last April in a shooting sparked by a traffic altercation.

The man accused of shooting Smith is on trial in New Orleans.

A decade ago, Gasser was involved in a similar altercation — at the same intersection — with a driver. The sheriff said that in February 2006, a man observed a truck driving erratically and called a number on the truck, speaking to a man later identified as Gasser.

Gasser and the man got into a fight on the phone and then Gasser followed the man to a service station, confronted him and hit him several times. Gasser drove away and the victim called 911.

Investigators found Gasser and issued a misdemeanor summons for simple battery, which was later dismissed. Authorities have said they are trying to determine why it was dismissed.