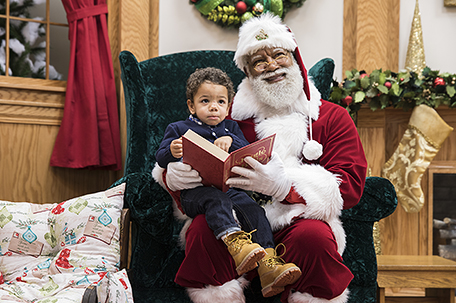 ABOVE PHOTO:  In this Thursday, Dec. 1, 2016 photo, Larry Jefferson, playing the role of Santa, poses for a photo with Kingston Strong, of Minneapolis, at the Santa Experience at Mall of America in Bloomington, Minn. The nation’s largest mall is hosting its first-ever black Santa Claus this this weekend. (Leila Navidi/Star Tribune via AP)

The Star-Tribune reports The Mall of America in suburban Minneapolis hired Larry Jefferson to play Kris Kringle as part of its Santa Experience.

Santa Experience co-owner Landon Luther says they “want Santa to be for everyone, period.” With that in mind, he tells the newspaper he launched a nationwide search for a diverse Santa and found Jefferson at a Santa convention in Branson, Missouri, over the summer. He was the only Black Santa among the 1,000 impersonators in attendance. 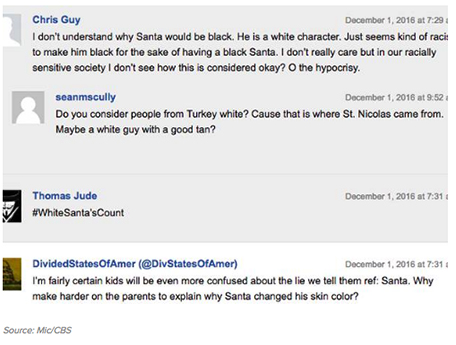 Jefferson tells WCCO-TV that playing the jolly old elf is “no big deal” to him, saying “I’m still Santa, I just happen to be a Santa of color.”

But unfortunately not everyone is embraced the Santa of color. News.Mic reported of some readers’ decision to unleash a torrent of racism in the Star Tribune article’s comments section, samples at left. 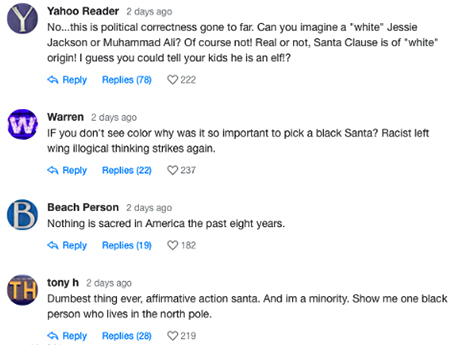 “I clicked on this story fully expecting that they picked a Somali to play Santa,” one person wrote. “That would be fitting for Minnesota. Have a radical Muslim who hates America and the western world play Santa. Give him a gun and some knives under his red suit and when the little Christian children come sit in his lap, he can cut their throats.”

The Star Tribune eventually had to close its comments section for the story, but other media outlets didn’t. As “RawStory” reported, commenters raged about reverse cultural appropriation at the bottom of CBS’ article.

News.Mic contributed to this article.