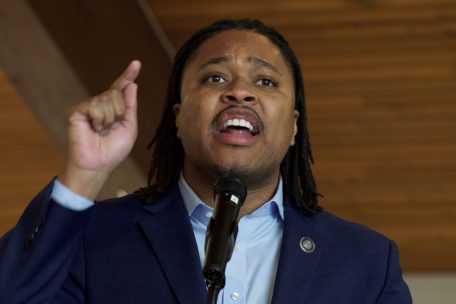 HARRISBURG, Pa. (AP) — The first live-televised prime-time debate between leading candidates for the Democratic nomination for Pennsylvania’s open U.S. Senate seat exposed differences between the rivals Thursday, as they seized opportunities to attack each other.

John Fetterman, the state’s lieutenant governor who has led polls and fundraising, took the brunt of the attacks from state Rep. Malcolm Kenyatta of Philadelphia and U.S. Rep. Conor Lamb of suburban Pittsburgh.

Fetterman in turn attacked Lamb, while Kenyatta was free to attack both without reprisal.

The race in the premier presidential battleground state is perhaps the Democratic Party’s best opportunity to pick up a seat in the closely divided Senate.

The primary election is May 17.

Perhaps the longest and sharpest exchange during the one-hour debate at the studio of WHTM-TV in Harrisburg came over a question about a 2013 incident when, shotgun in hand, Fetterman confronted someone who he believed to be involved with gunfire on a nearby street in Braddock, where Fetterman was mayor.ADVERTISEMENT

The criticism — that Fetterman was reckless and won’t acknowledge it — was, to a great extent, a reprisal of previous criticism lodged by Kenyatta and Lamb, albeit not with Fetterman standing a few feet away.

Lamb and Kenyatta have given the incident racial overtones: The man Fetterman confronted, Chris Miyares, is Black.

Fetterman has maintained that Miyares was masked and covered in clothing head-to-toe on a cold January day, and he had no idea of Miyares’ race when he pursued him.

Still, Fetterman didn’t answer the question posed to him: Would he do anything differently today?

“I just think that’s disqualifying for any of us who have to work hard to gain the trust of the Black community,” said Lamb, who is white.

Rather, Fetterman defended himself — as he has previously — by saying he made a split-second decision in the interest of public safety in a small city wracked by gun violence, and contended that he never aimed the shotgun at Miyares, as Miyares has said.

Fetterman and Kenyatta blamed the Biden administration’s failings, in large part, on Congress’ failure to pass Biden’s agenda, including opposition in the Senate by Democrat Joe Manchin of West Virginia.

Lamb, though, did criticize Biden, saying the president could have done better job of addressing the stress and pain on Americans of rising prices and the COVID-19 pandemic.ADVERTISEMENT

The debate also exposed differences over whether the candidates would vote to suspend the federal gas tax amid sky-high gas prices. Fetterman would — and recoup the lost money by raising taxes on the country’s wealthy — while Lamb and Kenyatta said they would instead find ways to attack other rising costs for working families.

On energy, the debate made plainer a long-standing difference. Kenyatta would end new natural gas drilling leases in an effort to clamp down on planet-warming greenhouse gases. Fetterman and Lamb, however, contend that natural gas is a fuel the country’s economy needs for now.

The candidates at many points sought to portray each other as flip-floppers or hypocrites.

Lamb contended that Fetterman is in favor of drilling when he’s talking to western Pennsylvania audiences — where the industry is more influential — and against it in eastern Pennsylvania, where voters are more skeptical.

Fetterman insisted his position on drilling has been consistent — despite changing it several years ago — and accused Lamb of accepting tens of thousands of dollars in donations from the industry, “so you can draw your own conclusion about his opinions and where they come from.”

At points, Lamb sought to paint Fetterman as too liberal to win a general election, tying him to Vermont Sen. Bernie Sanders, the insurgent Democratic presidential candidate in 2016 and 2020.

At other times, Fetterman and Kenyatta tried to paint Lamb as a conservative Democrat.

“Say what you will about Bernie Sanders, at least he supported and voted for Joe Biden’s agenda as opposed to Joe Manchin, your mentor and someone that’s endorsed you in this 2022 race,” Fetterman said to Lamb.

Lamb — who repeatedly reeled off a list of Biden-supported legislation that he had voted for in the House — shot back.

“First of all, I’m just not sure who John thinks he’s sharing the stage with,” Lamb said. “I am the one person who has voted for every item in Joe Biden’s legislative agenda.”