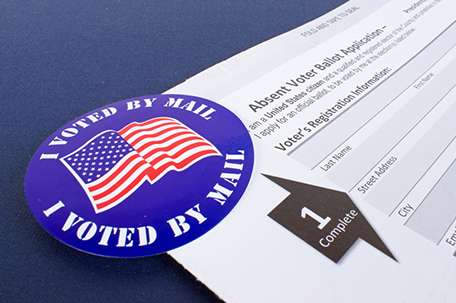 By Mark Scolforo And Michael Rubinkam

HARRISBURG — Pennsylvania counties have processed about 283,000 absentee and mail-in ballots for the June primary, and requests from Democrats are three times more common than from Republicans, state elections officials said Tuesday.

The Department of State said 89,000 absentee ballot requests have already been processed, with the June 2 primary still seven weeks away.

During the 2016 primary, 84,000 votes were cast under the absentee ballot system, which is available only to those who offer an acceptable reason they would not be able to vote in person. Counties have already processed 195,000 requests for mail-in ballots under a state law passed last fall that permits them for any voter who requests one.

Pennsylvania has about 4.1 million registered Democrats and 3.3 million Republicans. Of the absentee and mail-in requests for the primary processed so far, about 209,000 are from Democrats and 73,000 from Republicans.

“First of all, the mail-in option is brand new, and now, with the COVID-19 situation, people want to vote at home, and we’re encouraging that,” Murren said. “We really have no way of knowing what this will end up looking like.”

In a Wisconsin statewide judicial election held last week, preliminary results indicated absentee ballots accounted for about seven in 10 of all ballots cast, compared with 12% during a Wisconsin Supreme Court election last year. Some of Pennsylvania’s most populous counties have begun asking about conducting the June 2 primary election entirely by mail amid fears the pandemic will pose a threat to poll workers and voters.

In other coronavirus-related developments in Pennsylvania:

A Republican proposal to force the governor to adopt new rules that would allow far more businesses to open during the COVID-19 pandemic moved ahead in the Legislature on Tuesday.

The bill would direct Wolf to develop a system based on guidance for businesses from the Centers for Disease Control and Prevention and on an advisory memo on the topic sent out late last month by the U.S. Cybersecurity and Infrastructure Security Agency.

Wolf closed businesses deemed not essential to sustaining life about a month ago and subsequently set up a review system for those who wanted permission to reopen.

Members of the House’s Republican majority argued that the Wolf administration’s approach has been inconsistent, unfair and difficult to understand. They said there are businesses that can safely operate and should. Democrats countered that loosening the shutdown, in place for about a month, would cause more infections and may overwhelm the health care system.

The House voted to send the proposal to the Senate, 107-95, with every Democrat and two Republicans opposed to it.

Wolf said in a conference call with reporters Tuesday that he would withhold judgment on reopening legislation until he sees details, but he acknowledged there are differences over the best approach.

Health providers and laboratories are largely failing to abide by a state requirement to provide data on the race and ethnicity of Pennsylvania’s COVID-19 patients, according to Levine.

She said the information is missing from over 60% of the coronavirus case reports submitted to the Department of Health, hampering the state’s ability to accurately gauge the pandemic’s impact on Pennsylvania residents.

The agency used its emergency communications network on Tuesday to remind labs and health providers to submit the demographic data.

Nationally, an Associated Press review of nearly 3,300 COVID-19 deaths found that African-Americans accounted for 42% of the toll, twice their share of the population in the areas covered by the analysis.