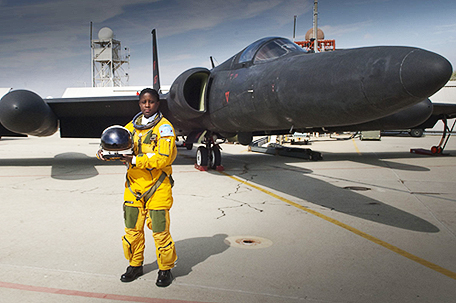 FORT GEORGE G. MEADE, MD.– By the time Merryl Tengesdal graduated from the Navy’s flight aviation program in 1994, the early women aviation pioneers like Bessie Coleman, Janet Bragg, Willa Brown and Mae Jemison had pretty much broken the barriers for race and gender.

But after the Bronx native switched to the Air Force a decade later, she helped rewrite the aviation and Air Force history books by becoming the first African-American woman to fly the U-2 reconnaissance plane. 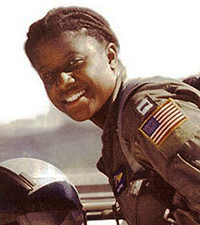 Inspired as a young girl by the “Star Trek” movies of the 1970s and ‘80s, Tengesdal went on to excel in math and science in high school and took that interest into college where she earned a bachelor’s degree in electrical engineering from the University of New Haven, Conn.

After graduating from college, Tengesdal traveled to San Diego where she applied for and was accepted into the Navy’s flight aviation program and would spend the next 10 years as a helicopter pilot flying the SH-60B Sea Hawk on missions in the Middle East, South America and throughout the Caribbean.

In 2004, Tengesdal switched to the Air Force where she made a dramatic change from helicopters to flying at altitudes of as much as 70,000 feet for hours at a time flying the U-2 reconnaissance plane. “I was one of five women in my class and the only female that graduated,” said Tengesdal. “I just stayed focused as I went through the training process.”

Tengesdal said the U-2 is one of the more difficult aircraft to fly, and is designed for high altitude, with a long wingspan and a landing gear with two wheels rather than three. “When you land, you actually have to stall the aircraft at two feet because of the wings.” Tengesdal said that some of her best moments as a U-2 pilot have come during Operations Enduring Freedom and Iraqi Freedom, along with Joint Task Force – Horn of Africa where she was able to provide troops on the ground with information obtained from her flights.

Tengesdal is a senior pilot with more than 3,200 flying hours, with more than 330 of those in combat. She is currently a lieutenant colonel assigned to Peterson Air Force Base, Colo.