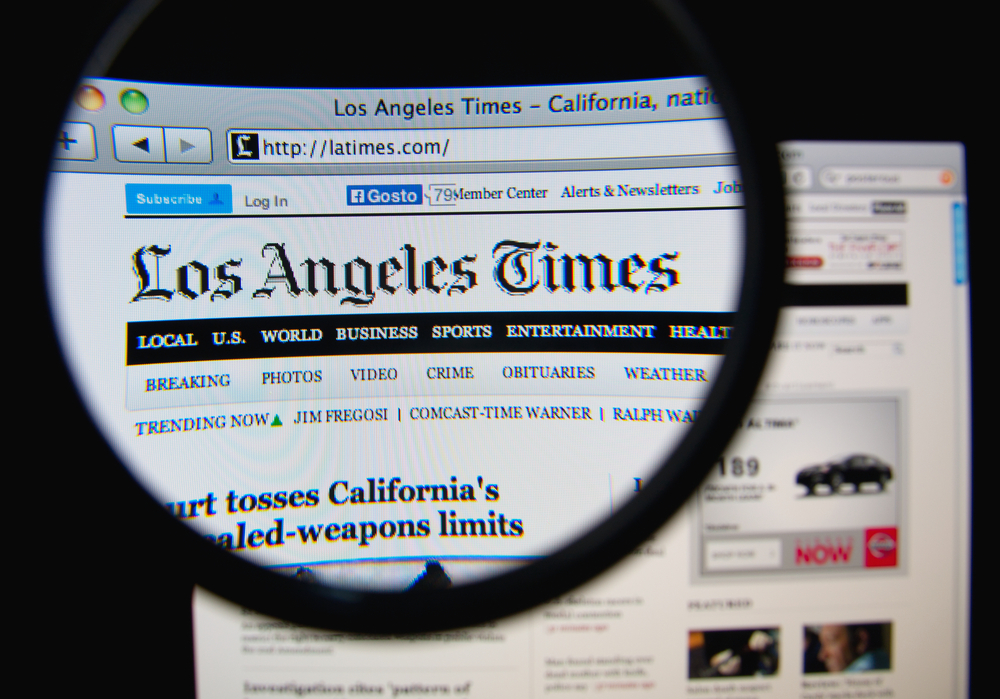 LOS ANGELES (AP) — A billionaire doctor struck a $500 million deal Wednesday to buy the Los Angeles Times, ending the paper’s quarrelsome relationship with its Chicago-based corporate overseers and bringing it under local ownership for the first time in 18 years.

The agreement between Los Angeles-based medical entrepreneur Dr. Patrick Soon-Shiong (soon-shong) and Tronc Inc. marks the latest instance of a rich, civic-minded individual buying a newspaper from a big corporation.

Soon-Shiong is a major shareholder of Chicago’s Tronc Inc., one of the richest men in Los Angeles and, according to Forbes, the nation’s wealthiest doctor, with a net worth of $7.8 billion.

The deal includes The San Diego Union-Tribune, various titles in the California News Group and the assumption of $90 million in pension liabilities.

Soon-Shiong takes over in a time of turmoil at the paper. The Times just replaced its top editor, the third switch at the position in the newsroom in six months. Publisher Ross Levinsohn had been on unpaid leave after revelations that he was a defendant in two sexual harassment lawsuits elsewhere. Tronc announced Wednesday that Levinsohn has been cleared of any wrongdoing and would be reinstated as CEO of its newly reorganized Tribune Interactive division.

Journalists voted last month to unionize for the first time in the paper’s 136-year history.

Clashes between the Los Angeles Times and Tribune Co., which changed its name to Tronc Inc., erupted not long after it acquired the West Coast paper in 2000. Staff at the Times bristled over what it considered a string of bad decisions made from hundreds of miles away in Chicago. Tronc owns the Chicago Tribune.

The editor of the Los Angeles Times, John Carroll, who led the paper to 13 Pulitzer Prizes, resigned under heavy pressure to cut staff. Before he left, he asked an old friend and billionaire philanthropist if he would consider buying the paper.

Publisher John Puerner stepped down at the Times, as did his successor, Jeffrey Johnson, shortly after.

Dean Baquet, who took over for Carroll, left after 15 months. He is now the executive editor at The New York Times.

The sale of the Los Angeles Times is in keeping with one of two trends in media ownership: big companies getting bigger and wealthy investors taking on newspapers as philanthropic endeavors, said Al Tompkins, a senior faculty member at the Poynter Institute.

“We find ourselves returning to where we were a century ago when a handful of wealthy owners controlled big influential newspapers,” Tompkins said. “Here’s the difference: The ownership today does not promise lucrative returns. You take it over knowing it isn’t nearly as profitable as it might have been 20 or 50 years ago. Today it’s a thinner margin and it gets thinner every day.”

Soon-Shiong also holds a minority interest in the Los Angeles Lakers, acquired in 2011 from Magic Johnson, the team’s former superstar and current president of basketball operations.

In an interview with the Times last year, Soon-Shiong acknowledged that as a major stockholder, he was unhappy with the way the Los Angeles Times was being run and felt a need to ensure its survival.

After The Washington Post first reported a potential sale Tuesday, cheers spread through the Times newsroom. After the deal was formalized, the union representing the newspaper’s journalists congratulated Soon-Shiong.

“Our readers expect and deserve the high-quality, independent journalism that has defined The Times for decades,” a union statement said Wednesday. “The LA Times Guild looks forward to working with a local owner who can help us preserve The Times as a guardian of our community and as the voice of the American West.”

Tronc said the deal will allow it to follow a more aggressive growth strategy focused on news and digital media. Acquisitions will continue to be a big part of its plan, Tronc said Wednesday, and the company announced that it’s buying a majority stake in online product review company BestReviews for an undisclosed amount.

The sale comes about a week after veteran Chicago journalist Jim Kirk was named editor in chief to replace Lewis D’Vorkin, whose short tenure was marked by clashes with staff.

Kirk, 52, had briefly served in the job during a management overhaul from August until November, when D’Vorkin joined the paper. D’Vorkin will stay on with Tronc as Chief Content Officer of Tribune Interactive, the company said Wednesday.

Reporters at the Times were alarmed by recent hiring of several news executives who reported to business executives, and not to news editors. That sparked fears the business side would wield undue influence in editorial matters. Traditionally, the editorial and business sides of a paper work separately to maintain journalistic credibility.

The question is whether a new owner will do more than halt cutbacks by reinvesting, as Bezos and Henry did at their newspapers, to set the Times on a new path.

“Given the huge challenges still faced by news publishing in the age of Google/Facebook ad duopoly and still-onrushing digital disruption, even a billionaire has his work cut out for him,” Doctor said.

Christopher Weber and John Rogers contributed to this report.