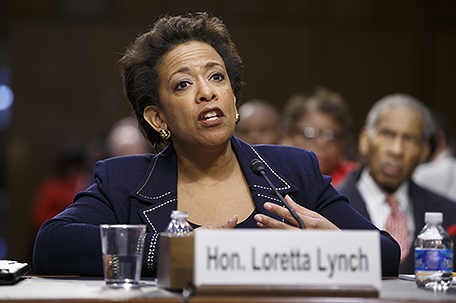 WASHINGTON — Loretta Lynch won confirmation to serve as attorney general Thursday from a Senate that forced her to wait more than five months for the title and remained divided to the end.

The 56-43 vote installs Lynch, now U.S. attorney for the Eastern District of New York, as the first black woman in the nation’s top law enforcement post. She will replace Eric Holder, a perennial lightning rod for conservatives who was once held in contempt of Congress.

The vote total for Lynch was the lowest for any attorney general since Michael Mukasey won confirmation with 53 votes in 2007 after Democrats decried his refusal to describe waterboarding as torture.

For Lynch, 55, the issue that tore into her support with Republicans was immigration, and her refusal to denounce President Barack Obama’s executive actions limiting deportations for millions of people living illegally in this country. Questioned on the issue at her confirmation hearing in January, she said that she believed Obama’s actions were reasonable and lawful.

Democrats angrily criticized Republicans for using the issue against her, but Republicans were unapologetic.

Yet after returning from the campaign trail to rail against Lynch on the Senate floor Thursday, Cruz was the only senator absent when the vote was called. He voted “no” on a procedural vote earlier in the day, which spokeswoman Amanda Carpenter insisted “was the only vote that mattered.” She did not explain why Cruz missed the vote on final passage.

Still, Lynch won the support of 10 Republicans, more than expected in the days heading into the vote. In a surprise, Senate Majority Leader Mitch McConnell, R-Ky., was among those voting “yes.”

From the White House, Obama hailed her confirmation.

“Loretta has spent her life fighting for the fair and equal justice that is the foundation of our democracy,” he said. “She will bring to bear her experience as a tough, independent and well-respected prosecutor on key, bipartisan priorities like criminal justice reform.”

Lynch grew up in Durham, North Carolina, the daughter of an English teacher and a minister. Her father, Lorenzo Lynch, 83, watched from the Senate visitors’ gallery Thursday as his daughter won confirmation.

Afterward, he told reporters: “The good guys won. And that’s what’s been happening in this country all along, even during slavery.”

The long delay in confirming Lynch since she was nominated in November incensed Democrats, with Obama himself weighing in last week to lament Senate dysfunction and decry the wait as “crazy” and “embarrassing.” There were various reasons for the delay, most recently a lengthy and unexpected impasse over abortion on an unrelated bill to combat sex trafficking that McConnell insisted on finishing before moving to Lynch, for reasons that were never fully explained.

Yet Democrats controlled the Senate when Lynch was nominated last November and could have brought up her nomination for a vote then. They held off with the GOP’s encouragement after being routed in the midterm elections and spent the time confirming judges instead.

There was an expectation that Republican leaders would move Lynch’s nomination swiftly this year, especially since most GOP members of Congress loathe Holder, who’s seen as too politically close to Obama and even more liberal. But instead, the nomination became tangled in the dispute over Obama’s executive actions on immigration, and seemed to stall.

Lynch has been the top prosecutor since 2010 for a district that includes Brooklyn, Queens, Staten Island and Long Island, a role she also held from 1999 to 2001. She’ll take over a Justice Department focused on fighting terrorism and cyberattacks, and consumed in a national debate over law enforcement’s treatment of black men.