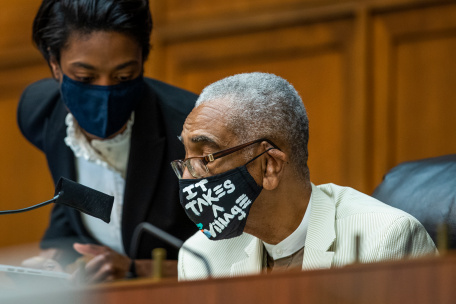 Rush, 75, was expected to discuss his future Tuesday morning at a Chicago church where the video would also be shown. He confirmed his plans to The Chicago Sun-Times, saying Monday he finalized his decision weeks ago.

The Democrat, known for anti-violence activism and racial equity work, was first elected to Congress in 1992. He holds the distinction of being the only politician to win a race against Barack Obama, easily defeating the then-state senator in a 2000 congressional primary.

Rush, an ordained minister who preaches on Chicago’s South Side, said he would remain in the public eye and continue ministry after leaving Congress.

Throughout his congressional career, Rush hasn’t avoided direct action. He was arrested in 2004 for blocking the driveway of Sudan’s embassy during a “protest demanding an end to genocide” in that country. He was in the headlines in 2012 for wearing a hooded sweat shirt on the House floor after the death of teenager Trayvon Martin, a move that earned him a reprimand for violating rules of wearing hats in the chamber.

He also raised eyebrows with some of his sharper comments, like when he dismissed an anti-violence plan by former Illinois Republican Sen. Mark Kirk as a simplistic “white boy” solution to a complex problem.

He’s pushed legislation, named after Emmett Till, designating lynching as a hate crime under federal law. Till was a Black Chicago teen whose lynching in 1955 galvanized the civil rights movement.

The trajectory of Rush’s political career has been unusual.

Born in Georgia, Rush served in the U.S. Army as a teenager, became involved in the civil rights movement and later co-founded the Illinois Black Panther Party. He was arrested in 1969 and convicted on a weapons charge. Years later, he decided he could do more from within the establishment and was elected as a Chicago alderman, serving eight years. He also made one unsuccessful bid for mayor against then-Mayor Richard M. Daley.

Rush faced Obama in the 2000 Democratic primary and won by a nearly 2-1 margin. Just before the primary, one of Rush’s son died from gunfire when two men attempted a holdup. After the death, Rush focused on gun-control measures.

Over the years, Rush has also experienced health problems and underwent surgery in in 2008 to have a cancerous tumor in his salivary gland removed. He returned to Congress after months of chemotherapy, his appearance altered and voice softer. Doctors told him he was cancer-free.

He recently disclosed a breakthrough case of COVID-19 but said he did not have any symptoms.

In the 16-minute video, Rush said that leaving Congress would give him a chance to share his wisdom with others.

“It’s just going to allow me to be more effective in greater ways,” he said in the video. “There is not a rocking chair or easy chair that’s been created that will be able to contain me.”