To longtime activist, self-reliance remains the answer to poverty 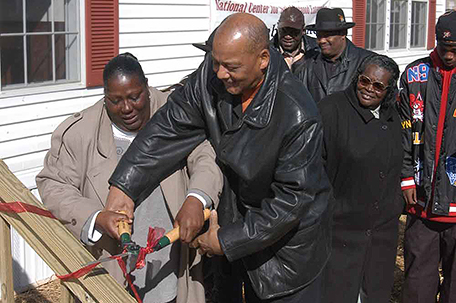 ABOVE PHOTO:  Woodson participates in a ribbon cutting ceremony for a new home.  (Photo provided by The Robert Woodson Center)

“What I’m saying to Black America…,we must stop complaining about what White folks have done to us in the past. We must go into ourselves, as Dr. King said, and find indelible ink — our own emancipation proclamation.” –Robert Woodson, Sr.

Robert Woodson, Sr., advocate for the poor, recalled the moment he dedicated his life to helping African- Americans.

It was, he said, citing the Bible, his “burning bush experience.”

Woodson was 24, two years out of the U.S. Air Force, going to college days and working nights as a guard at a Philadelphia juvenile reform school. Many of the 65 youths he supervised had grown up poor and without fathers in their lives, as he had after his own father died when he was 9 years old.

His epiphany occurred one evening after he treated the youths to cookies and apples. As he cleaned up, they stood and applauded him.

“I had to turn on my heels and walk. I was crying…One of my colleagues [later] told me, ‘Man, the kids really got to you.’ He was right.”

The youngsters’ response to such a small act of kindness stoked a life-long desire in Woodson to help others.

“I didn’t get love, that way, growing up. But I knew how desperately I wanted that love,” he said. “I knew that I wanted to give that to other people.”

That was 55 years ago and Woodson has fulfilled his pledge. He has worked as a civil rights activist, a community organizer and a social worker with a master’s degree from The University of Pennsylvania. Most of his work was done through the center – last month renamed the Woodson Center – whose purpose is to empower residents of economically-depressed communities to resolve the problems that plague them. The center has assisted more than 2,500 community leaders in 39 states.

“Bob, in the 1980s, crafted strategies, along with Jack Kemp, to empower the residents of public housing,” said the Rev. Dr. DeForest B. Soaries, Jr., pastor of a Somerset, New Jersey, church and creator of a program to help people get out of debt. “Bob has the most creative mind in the country helping people to  out of poverty. The Woodson approach is to help people become self sufficient and so they won’t need [government] programs to help them.”

Steve Schuck, a real estate developer based in Colorado Springs, Co., has known Woodson for 25 years and described Woodson as a tireless advocate for disenfranchised citizens.

Schuck’s passion is helping those in despair improve their quality of life.  For years, Schuck has worked with an alcohol and substance abuse program.

He has never experienced substance or alcohol abuse issues himself and learned how to effectively help people by watching Woodson interact with people in crisis.

“Bob is my mentor,” said Schuck, who also describes himself as a school choice advocate. “He taught me how to get things done in the non-profit community that will have a lasting impact.”

Schuck said Woodson’s is an effective and powerful teacher.

“Bob changed my life dramatically,” Schuck said. “He taught me that if I really want to help people I need to focus on what’s best for people in the long run, not what makes me feel good.”

Woodson, 79, a political Independent, has worked with lawmakers on both sides of the aisle. He was honored with the John D. and Catherine T. MacArthur “Genius” Fellowship in 1990 and the Lynde and Harry Bradley Foundation Prize in 2005. He was awarded the Presidential Citizens Medal in 2008.

Woodson believes that programs to help the poor often make people dependent on government, an observation that has put him at odds with many of the nation’s African-American leaders.

Woodson broke with the NAACP and others in the Civil Rights movement when he opposed busing for integration in the 1960s. He believed Black children were often forced to leave better schools with more highly educated Black teachers to attend inferior ones in White and racially-mixed neighborhoods and was accused of siding with segregationists.

“I said just because we have a common issue, doesn’t mean we have a common purpose,” Woodson said. “Their reasons for [opposing] school busing and mine were different. I said ‘If Hitler likes classical music and I like it, am I supposed to stop liking it? You have got to take your position on the truth, no matter who supports it or not.”

Last year, Woodson took what some believe was a controversial position. He toured the country with Rep. Paul Ryan (R-WI) and introduced Ryan to social initiatives that benefit the poor.

It was an uncommon alliance, some said, considering GOP leaders are not known for embracing the poor through legislative policies.

But as Woodson celebrates the 35th anniversary of his nonprofit, he wants to connect even more residents and community leaders with people and companies with resources to help them.

“That’s how partnerships are formed that help people to help themselves,” Woodson said.

His is the perfect model at a time of shrinking public resources, said syndicated columnist Raynard Jackson, founder of Black Americans for a Better Future, which honored Woodson with its 2016 Trailblazers Award.

“Woodson is saying, ‘I want you to be so successful that you don’t need [help],’” Jackson said. “A great teacher is one who makes himself or herself increasingly unnecessary to their students. A poor teacher makes students more dependent on them. Bob is a great teacher.”

And Woodson always leads by example.

In the summer of 1999, for example, the crack epidemic was wreaking havoc on Washington, D.C.

Drug-related violence had claimed many victims, but few of their stories were as tragic as that of Helen Foster-El, a grandmother who was fatally shot during a gun battle in her Washington, D.C. neighborhood. She was hit as she rushed children into her home to protect them from the gunfire from local gangbangers.

Woodson reached out to community leaders and asked for a meeting with warring crew members involved in the conflict at the Northwest Washington office of his Center for Neighborhood Enterprise, a nonprofit he founded in 1981. He listened to the young people discuss the likely outcomes of their lives – kill, be killed or prison. He then offered to find an apprenticeship, job training or a job for anyone who wanted an alternative.

“Mr. Woodson doesn’t run any programs, he comes in and finds out what the people in the communities need, then he provides it so they can help themselves,” said Curtis Watkins, 60, a community leader who attended the meeting and now works for Woodson. “He provides the moral authority and he creates the structure and the process – the ‘what you will do and why.’ He brings in the resources so the community can make it happen.”