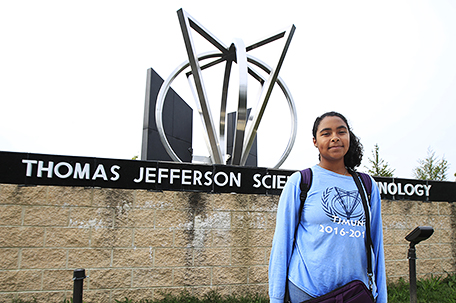 ABOVE PHOTO:  Alina Ampeh, a student at Thomas Jefferson High School for Science and Technology in the Alexandria section of Fairfax County, Va., speaks to an Associated Press reporter in front of her school. (AP Photo/Manuel Balce Ceneta)

McLEAN, Va. –It’s an annual rite in Fairfax County, which has one of the wealthiest, best-educated populations in America: Hundreds of second-graders troop off to private psychologists for IQ tests to prove they’re worthy of advanced academic programs in the public schools.

The competition is fierce. Acceptance, some parents believe, can be the key to getting into prestigious Thomas Jefferson High School for Science and Technology, a magnet school that routinely sends graduates to the most competitive colleges.

“I guess I never made the cut,’’ said Aaron Moorer, who is African-American and eventually graduated from Mount Vernon High with a 3.8 GPA. “I never made the special class.’’

Moorer’s family wasn’t aware that hundreds of families file appeals every year, armed with private exams costing more than $500, to persuade bureaucrats their child is deserving. This system exacerbates a problem plaguing gifted-and-talented programs across the nation: Black and Hispanic students almost never file the appeals that can secure their admission.

Using the Virginia Freedom of Information Act to obtain 10 years of county records, The Associated Press found that fewer than 50 Black and Hispanic second-graders have filed successful appeals. That’s less than 3 percent of the 1,737 second-graders admitted through the appeals process, further skewing a program already heavily weighted toward Whites and Asians.

Fairfax County has the nation’s 10th largest public school system, with more than 188,000 students. Of those, 25 percent are Hispanic and 10 percent are African-American. But over the last 10 years, Blacks and Hispanics have constituted only 12 percent of the students deemed eligible for Level IV, the most advanced academic program.

Francisco Duran, the school system’s chief academic and equity officer, downplayed the disparities in the appeals process, citing successful efforts to enroll more Black and Hispanic students through teacher referrals and other means. But he acknowledged that the school system is not where it wants to be in terms of identifying students at an early age who have the potential for advanced academics.

“We want it to be so that we don’t have a need for an appeals process,’’ Duran said.

Looking back, Moorer is sure he could have handled more advanced classes if given the opportunity.

“Not being included in the academic program kind of left me feeling unchallenged. I was able to get straight A’s but I was often left bored in class. I felt somewhat envious to know that many of the friends that I had in those classes were learning at a more advanced level,’’ said Moorer, now an undergrad at Hampden-Sydney College. He also was accepted at James Madison University but was waitlisted at Virginia Tech and turned down by University of North Carolina.

For talented students, the stakes are high: Children in Level IV, the highest and most competitive, can be assigned to schools with concentrated numbers of gifted students, providing what many parents feel is a more robust learning environment. Lower levels, offered in neighborhood schools, may include occasional enrichment projects, outside classwork and advanced reading assignments.

The appeals culture in Fairfax is so prevalent that nearby George Mason University has graduate psychology students learn their trade by administering the tests. Ellen Rowe, the Cognitive Assessment Program’s director, said sliding-scale fees make testing accessible to low-income families, but “we don’t control who comes to us.’’

Even the lucky ones can sense the injustice. Mark Biear of Vienna, who is white, has two kids in Level IV, one of whom successfully appealed. He found that some parents discussed the process openly, while others seemed reluctant to share information might give another family an advantage.

“I wish it was more transparent,’’ said Biear.

Plucker applauds the placement testing for all second-graders, but says allowing hundreds of parents to spend hundreds of dollars for a second IQ test defeats the purpose. “Why add a second level to the process that just reintroduces the disparities you’re seeking to get rid of in the first place?’’ he asks.

Carol Horn, who ran the advanced academic program for Fairfax County Public Schools until her recent retirement, acknowledged the enrollment gap. She noted that some form of appeals process is required by the state. She initiated Young Scholars, an effort to enroll and support more minorities in advanced classes, and encouraged teachers to send more kids of color her way, which has led to more diversity.

“If parents don’t know about the program, teachers become the advocate for the children,’’ Horn said.

It’s not just that appeals are costly, said Tina Hone, who advocated for minority students when she was a Fairfax County school board member. Some Black and Hispanic families may be less interested in advanced placement when it means moving a child out of neighborhood school where specialized education isn’t offered, she said.

“It’s about cultural norms,’’ said Hone, who is African-American. “It’s not just about money.’’

Katherine Cespedes said teachers didn’t encourage her to pursue advanced academics after she arrived in Virginia from Argentina at age 7. She said they initially focused more on developing her English-language skills.

“I don’t think my teacher believed I was capable back then,’’ Cespedes said. Only after an English teacher at Falls Church High School took interest in her did she push herself to take honors courses, graduating with a 3.5 GPA and earning a scholarship for George Mason University.

There are just a few dozen Black students at Thomas Jefferson, where sophomore Alina Ampeh is surrounded by whites and Asians — a situation she’s lived with since elementary school. She’s grateful that all those years of advanced classes prepared her for TJ’s rigorous academics, but says that doesn’t necessarily make her special: She thinks many of her classmates simply have parents who worked the system. “If you want to get in, you just complain about it,’’ she said.

Alina’s mother, Karen Ampeh, also is grateful, but disappointed that so few African-Americans have benefited from such high-quality instruction.

“In my experience, the AAP program is for students who are pushed by their parents, or possibly other adults, to be in the program,’’ she said. “It is not a welcome environment for Black students unless they have a lot of support from home.’’