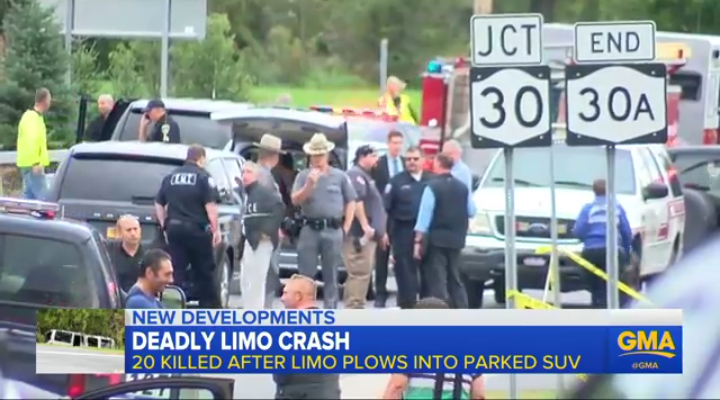 By The Associated Press

New York Gov. Andrew Cuomo says a limousine involved in a crash that killed 20 people in upstate New York had failed a state inspection and should not have been on the road.

He said Monday the vehicle had been inspected by the state’s transportation department just last month.

Cuomo also said the driver didn’t have the appropriate license and the stretch limo had been rebuilt in a way that violated federal law.
He said the company, Prestige Limousine, “has a lot to answer for.”

The crash Saturday in the town of Schoharie killed two pedestrians and 18 occupants of a limousine, including four sisters.

Relatives said the group of young adults was headed to a birthday party. Some lived in nearby Amsterdam, New York, and grew up together. Two of the couples were newlyweds.

The Amsterdam school district is offering grief counseling Monday. One of the victims, Abby Jackson, was a teacher there.

She and her husband Adam left behind two daughters: 4-year-old Archer and 16-month-old Elle.

Another person killed worked in the technology office of the state Senate.

She says he had “a golden heart” and “made you laugh so hard until you cried.”

A memorial gathering was planned for Monday evening in Amsterdam.