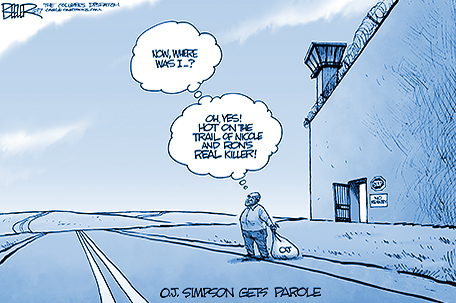 Justin Zimmerman was a 7-year-old Black boy in Moreno Valley, California, when O.J. Simpson was on trial for murder.

He wasn’t old enough to understand the “trial of the century,’’ but his parents and the older Black people in his community made their position clear: They were cheering for Simpson, and were convinced the former NFL star was an innocent dupe in a racial conspiracy. For them, Simpson was a symbol of racial tension and uneven justice.

But Zimmerman, now 30 and living in Washington, D.C., grew up amid the hashtags that have come to symbolize the killings of unarmed Black men by police. On his Facebook page on Thursday,  after Simpson was granted parole from armed robbery and assault convictions, Zimmerman posted: “Let 1994 go guys.’’

“The most relevant thing that came out of O.J. since the trial was the Kardashians for millennials,’’ said Zimmerman, referring to Simpson’s close friendship with the reality-TV clan that was highlighted in a recent television series about the case. Family patriarch Robert Kardashian, a lawyer, was on Simpson’s defense team during the murder trial.

“We don’t have an O.J.,’’ Zimmerman said. “For me, that was Trayvon Martin. He was me. That resonates more to me … It wasn’t like (Simpson) was at the forefront of any movement.’’

While millions watched Simpson’s parole hearing last week, audiences were hardly as emotionally invested as they were a generation ago watching his murder trial. Simpson’s 1995 acquittal in the deaths of his wife, Nicole Brown Simpson, and her friend Ronald Goldman bitterly polarized Americans around race.

But interest has waned, attitudes have changed and black Americans are wrestling with more familiar injustices.

Today, Simpson’s racial symbolism is largely seen as a relic.

“We just have bigger concerns that are much more directly impacting our specific lives,’’ said University of Pennsylvania sociologist Camille Z. Charles. “We now have symbols that reflect what actually happens to most Black people. Most Black people don’t get fancy lawyers that get them off. They don’t have jurors that will be sympathetic because of celebrity. The tide has shifted.’’

On Oct. 3, 1995, an estimated 150 million people,  more than half the country at the time, tuned in to hear the jury’s verdict in Simpson’s trial for the Brown-Goldman murders. The strategy for Simpson’s defense team,  which included legendary Black litigator Johnnie Cochran, was to frame the case around race. They argued that Simpson had been framed by a corrupt and racist Los Angeles Police Department.

Simpson spent much of his life distancing himself from the Black community. He lived in the wealthy enclave of Brentwood in Los Angeles and traded his Black college sweetheart for a blonde, White woman. And he once said, “I’m not Black. I’m OJ.’’ Still, many African-Americans saw the former running back and actor as a pioneer and cultural icon. Even before he became a criminal defendant, Simpson stood for something bigger.

Charles McKinney, who is Black, was at work on June 17, 1994, when a friend called and told him to turn on the television. In his office with his white co-worker, the two saw the infamous Bronco chase as Simpson tried to elude police on a California highway.

“My co-worker was like, ‘I think we should both go home and watch this,’’’ recalled McKinney, now 49, and a resident of Memphis, Tennessee. “I knew it was a simultaneously fascinating and toxic mix of race, reality television and celebrity, to see how quickly the nation just split itself along racial lines and how Black folks tried to navigate this moment.’’

At the time, many Blacks were less concerned with Simpson’s guilt or innocence. For them, Simpson’s wealth balanced the scales of justice in a way that was impossible for most Black defendants: He could afford to buy his freedom.

“That sort of euphoria around somebody Black working the criminal justice system and having it come out the way that it comes out for White folks all the time was kind of a big deal,’’ Charles said. “We knew ‘not guilty’ didn’t mean ‘innocent.’’’

Time has sobered the view of many Blacks since the verdict. Recent polls show that a majority of Blacks now say they believe Simpson was guilty, a view shared by only about 20 percent of Blacks at the time of the trial.

When Simpson was convicted in Nevada for a hotel-room heist in 2008 and sentenced to up to 33 years in prison, Blacks and Whites perceived the harsh sentence as a proxy justice for his earlier acquittal. Still, McKinney wasn’t glued to his television for Thursday’s hearing. His initial reaction: Who cares?

“It’s older White people or people who were around in 1994,’’ McKinney said. “You get them mad about the case again. For folks in my generation, nobody was running home to watch this. He’s a symbol, but we have lots of symbols now of people who embody these tensions.’’

Simpson’s hearing on Thursday also didn’t resonate with Shane Walk, 23, of Albuquerque, a White man who was an infant when the verdict came down.

“I didn’t live through the trial, so he doesn’t represent to me, at least, to be a racial, polarizing figure as he did with previous generations,’’ said Walk, adding that he felt the hearing was just another passing fad for the media and that people his age should focus on the current divisions in our country.

For Zimmerman, that focus belongs more on the modern-day issues around race and policing that Simpson’s case once captured.

“I have no vested interest in O.J.,’’ Zimmerman said. “I would like for our country to get over certain things that just really don’t affect us. His freedom doesn’t affect anybody. There’s no systemic issue with O.J. being free.’’

US: Shadowy world of racial contradictions