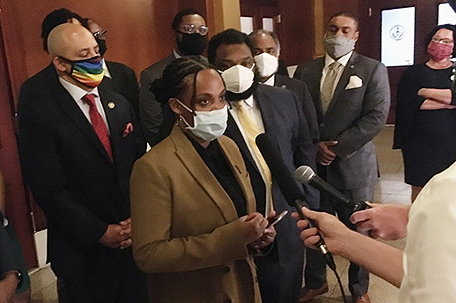 ABOVE PHOTO: Pennsylvania state Rep. Summer Lee, a Democrat from Pittsburgh, speaks with reporters in the Pennsylvania Capitol in Harrisburg, Pa., Monday, June 8, 2020. Lee and other Democrats commandeered the state House rostrum on Monday to press for movement on bills to change police procedures and accountability. (AP Photo/Mark Scolforo)

HARRISBURG, Pa.  — Black Democrats in the Pennsylvania House preempted the day’s business to call for changes to policing, displaying a Black Lives Matter banner and commandeering the podium for about 90 minutes at the start of a voting session Monday.

The dramatic takeover went on pause when the Republican speaker said that he would consider putting proposals up for votes and that he supports a special session the protesters had sought to consider the legislation.

The protesters unfurled the banner at the dais and vowed they would not leave without movement on proposals to ban chokeholds, improve tracking of officers who have engaged in misconduct, and widen access to police video.

“We’re going to stay here until you act,” said Rep. Malcolm Kenyatta (D-Philadelphia). “This is our moment to say, ‘Enough is enough.’”

Rep. Steven Kinsey (D-Philadelphia) said he was “frustrated, upset and feeling as though I’m carrying the weight of black folks on my shoulders.”

As the session was scheduled to begin at 1 p.m., the House-controlled camera feed suddenly pivoted away from the front of the chamber, where the speaker sits, so the cameras did not show the action.

About that time, a Facebook feed from Democratic Whip Jordan Harris, (D-Philadelphia) showed members had taken over the rostrum and were speaking passionately about the racial injustice protests and demonstrations that have occurred over the May 25 death of George Floyd at the hands of Minneapolis police.

“Can you imagine the anguish that Black Americans feel, having seen this video time and time again, throughout generations?” asked Rep. Margo Davidson (D-Delaware). “The time of brutalizing African Americans has not stopped, and we’re saying it’s time, because we cannot breathe.”

It’s been two weeks since Floyd died after a white Minneapolis police officer pressed his knee into Floyd’s neck for several minutes, even after he stopped responding. Lawmakers across the country have already begun to consider making changes to state law regarding police procedures and regulations in response to the protests, and Democrats in Congress rolled out their own proposals on Monday.

In the state Senate, Republicans announced they would hold hearings next week on law enforcement and criminal justice accountability reforms, a plan a spokeswoman said began before the House protests.

Kinsey asked everyone in the chamber to kneel for 8 minutes and 46 seconds, the length of time prosecutors say Floyd was pinned to the ground under the officer’s knee.

Several House Republicans appeared to be kneeling and others praying while seated. Under special rules passed to cope with the pandemic, members do not have to be in the Capitol to vote, and attendance was spotty.

Rep. Russ Diamond (R-Lebanon) said he and some of his fellow Republicans were unhappy about the protest.

“The way to get 19 bills heard is to draft them properly, bring them before the House and hold a majority,” Diamond said.

“We live in challenging times,” Turzai said, describing himself as a 60-year-old white man. “I understand silence is not the answer for what is happening.”

Republicans hold a sizable majority in the House, giving them ample tools to prevent action on any bills, and they have shown no interest this session on Democratic-sponsored proposals to reform police.

The House never formally convened. Democratic and Republican leaders met privately afterward and planned to confer again before Tuesday’s session. Democrats declined to say what their plans are if they do not get the response they want.

Special sessions can be a way for lawmakers to act quickly on matters that require multiple bills, but in the Pennsylvania Legislature they also have been used to mollify demands by appearing to act without actually approving any substantive legislation. The House would not need a special session to take up police bills.