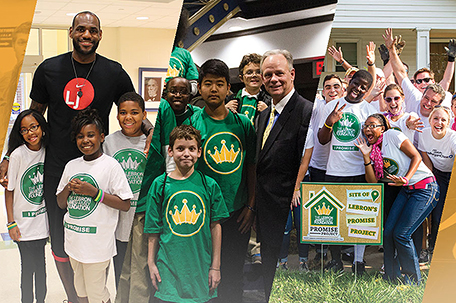 ABOVE PHOTO:  LeBron James and Dr. Scott Scarborough stand with children of the ‘I Promise’ Project.

James said many kids don’t have mentors to keep them on track, as he had growing up.

Basketball superstar LeBron James announced that his foundation plans to open a public school in his hometown of Akron, Ohio, for academically at-risk students, according to a Huffington Post report.

The foundation is working with the Akron Public Schools district to open the doors of I Promise School for students in the third and fourth grades in the fall of 2018. By 2022, the school will expand to include grades 1 through 8.

I Promise School will focus on students who “are at-risk in reading and who are in need of additional academic intervention before falling further behind their peers,” a statement from the LeBron James Family Foundation said.

At the announcement ceremony, James underscored that he was fortunate to have mentors, his mother and close friends who helped raise him.

“They would not let me get off course. A lot of the kids I see today in the community and all over the world are not lucky enough to have the same mentors and the same people around that can help their dreams become reality,” he said, according to The Post.

Akron Public Schools Superintendent David James attended the ceremony. He said, “We definitely understand how important it is to create an environment where our most challenged and at risk students feel safe, supported and cared for.”

James’ foundation will submit a formal proposal to the school board in October 2017.