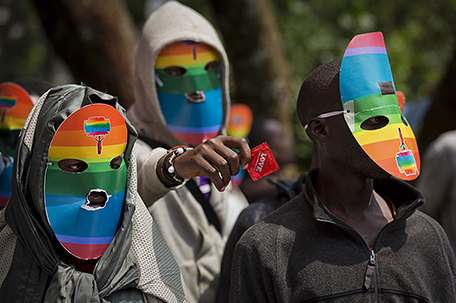 ABOVE PHOTO:  Kenyan gays and lesbians and others supporting their cause wear masks to preserve their anonymity and one holds out a condom, as they stage a rare protest, against Uganda’s increasingly tough stance against homosexuality and in solidarity with their counterparts there, outside the Uganda High Commission in Nairobi, Kenya.  (AP Photo/Ben Curtis, File)

KAMPALA, Uganda — A look at global reactions after Uganda President Yoweri Museveni signed a controversial anti-gay bill that calls for harsh penalties, including 14 years in jail for first-time offenders, and life imprisonment as the maximum penalty for, among other offenses, repeated gay sex between consenting adults.

Kenyan prize-winning writer Binyavanga Wainaina, who came out as gay last month in an online essay, said Museveni is looking to create a political wedge issue that will help his constituents forget about government corruption and a lax economy.

“By the time the next election happens, mysterious opposition figures are going to be arrested for being homosexual, can we bet? Cause all you need is a suspicion, isn’t it?” Wainaina told The Associated Press. “They are never going to police it in an accurate way.”

Ugandan gay activist Dr. Paul Semugoma, who avoided deportation from South Africa last week, said: “It is sad that they disapprove of me and consider me to be evil, unnatural and un-African because of my kind of love. What should it matter to anyone who I love?”

“It’s simply politics of destruction. We (homosexuals) are convenient scapegoats to be used when they need to boost their political power.”

Opponent of the U.S. gay-rights movement and Massachusetts-based evangelical lawyer Scott Lively said: “I would rather the Ugandans had followed the Russian anti-propaganda model which reflects my philosophy of preventing the mainstreaming of homosexuality with the minimum limitation on personal liberties for those who choose to live discretely outside the mainstream.”

The U.S. national security adviser, Susan Rice, posted on her Twitter account: “Nobody should be discriminated against or punished for who they are or whom they love. Sad day for Uganda and the world.”

“This legislation will institutionalize hatred and discrimination against lesbian, gay, bisexual, transgender and intersex people in Uganda. Its passage into law signals a very grave episode in the nation’s history,” said Michelle Kagari of Amnesty International.

“The U.K. strongly opposes all discrimination on any grounds. We question the Bill’s compatibility with Uganda’s constitution and international treaty obligations. There can be no doubt that this Bill will increase persecution and discrimination of Ugandans, as well as damage Uganda’s reputation internationally,” said Britain Foreign Secretary William Hague, adding he was deeply saddened by the signing. “We will continue to press the Government of Uganda to defend human rights for all, without discrimination on any grounds.”

“This is a huge blow for anyone who values basic human rights. In the complete absence of a victim, Museveni has signed a piece of legislation that protects no one and persecutes many,” said Jonathan Cooper, Chief Executive of the Human Dignity Trust, a collection of law professionals supporting groups to uphold human rights. “This bleak situation will have an immediate effect on countries like the U.K., the rest of the EU, Canada and U.S., as people flee and seek sanctuary. The international community must do all that we can to stand in solidarity with those fighting to uphold their human rights.”

In Belgium, Prime Minister Elio Di Rupo, who is openly gay, said his country “firmly condemns this violation of human rights and demands that the international community react forcefully.”

“Today is a very sad day for LGBT rights,” he said in a Twitter post. “I am appalled by the anti-gay law in Uganda.”

Sweden’s Minister for International Development Cooperation Hillevi Engstrom said Sweden will also consider redirecting its 70 million Swedish kronor ($10.7 million) in aid to Uganda when it completes an evaluation this spring.

“I want to emphasize that our aid is not without conditions. The Swedish government puts a lot of focus on human rights,” Engstrom said.